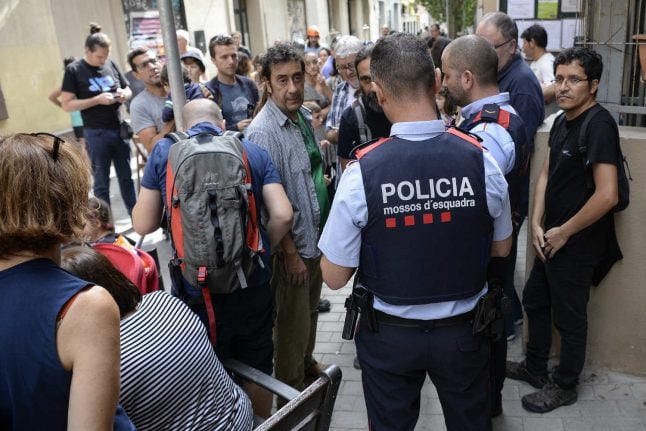 Catalan police officers report the activities organized by parents in a school at the Gracia neighbourhood in Barcelona, on September 30th 2017. Photo: AFP

“Of the 2,315 polling stations… 1,300 have been sealed off by the Mossos d'Esquadra,” the Catalan police force, said Enric Millo, the central government's representative in Catalonia, adding that 163 of these were being “peacefully” occupied by people who will be allowed to leave though no one will be allowed in.

Catalan separatists showed determination earlier on Saturday to press ahead with the independence referendum, which is banned by Madrid, occupying dozens of schools designated as polling stations to stop police from closing them down.

With less than 24 hours left until the highly-anticipated vote, tensions were running high in this wealthy northeastern region where Catalan leaders have taken a stand against the central government in Madrid.

The standoff has morphed into one of the biggest crises to hit Spain since democracy was restored after the death of dictator Franco in 1975.

“In these hugely intense and hugely emotional moments, we sense that what we once thought was only a dream is within reach,” Catalan leader Carles Puigdemont told a crowd of cheering supporters on Friday evening, as he wrapped up his campaign.

In Madrid, thousands of people, many waving red and yellow Spanish flags, rallied on Saturday in favour of Spanish unity on the day before the banned referendum on independence for Catalonia.

The demonstrators gathered in the central Plaza de Cibeles, in front of the capital's town hall, chanting “Catalonia is part of Spain!” and “I am Spanish, Spanish, Spanish!” — a cry usually heard during national team football matches. Some of the demonstrators called for Catalonia's pro-independence president Puigdemont to be jailed.

Puigdemont has vowed to push ahead with the independence vote for Catalonia, a wealthy northeastern region that is home to about 7.5 million people, even though a Spanish court has ruled that the vote is unconstitutional.

Prime Minister Mariano Rajoy's conservative government has also said the referendum is illegal and has vowed to do everything in its power to stop it.