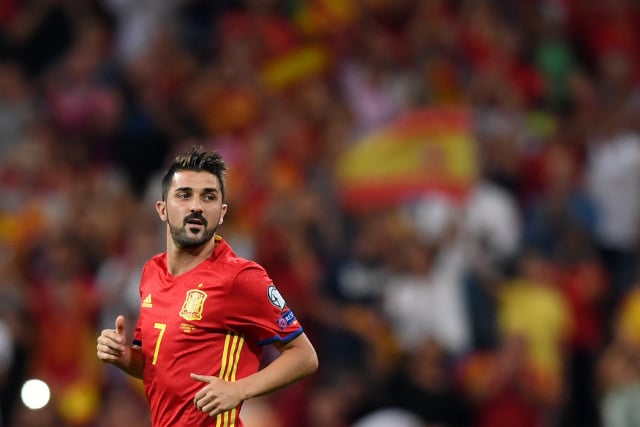 David Villa made an unlikely comeback for Spain earlier this year after not appearing since 2014. Photo: Habriel Bouys/AFP

But on Friday, Lopetegui said that Villa, who is two caps short of reaching a century, needed more time to recover from an injury suffered during the last international get-together and would likely be lacking match fitness.

In Villa's place Lopetegui called up Jose Callejon, who has scored four goals for Napoli this season, and Rodrigo Moreno, who has hit the net three times for Valencia. They have respectively just three and one caps.

“They're in great form and we think they can help us,” said Lopetegui.

Meanwhile, Lopetegui sprang to the defence of Barcelona centre-back Gerard Pique, often jeered by Spain fans due to his open stance in favour of a referendum on Catalan independence.

“I only judge players by their behaviour, application and attitude, and I have absolutely no doubts when it comes to Gerard,” he said.

“He's always given heart and soul for Spain.”

On Thursday, Pique called on people to vote peacefully in the plebiscite deemed illegal by Spain's constitutional court:

“From today until Sunday we will express ourselves peacefully. Don't give them any excuses. It's what they want. And we will sing loudly and clearly. #Wewillvote.”

The 2010 world champions realistically need only one win from their final two qualifying matches to book their ticket to Russia as they hold a three-point advantage over second placed Italy, but with a goal difference that is 17 better.

They play Albania on October 6 and then away to Israel three days later.