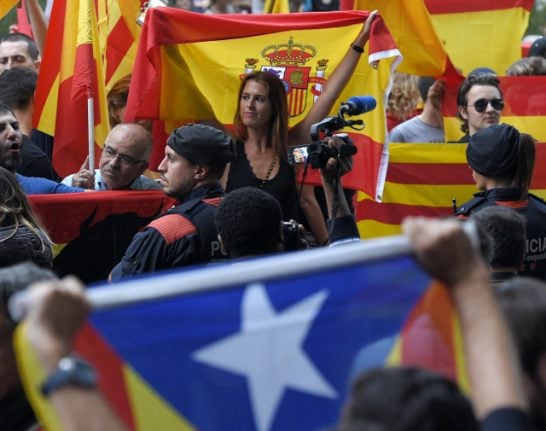 The “Respect for media in Catalonia” report was produced by RSF's Spanish section ahead of Sunday's plebiscite, which has been deemed illegal by Spain’s Constitutional Court. The report pointed out that while attacks against journalists on social media are not limited to any single ideology or country, escalating tensions between opposing sides in the build-up to the October 1st vote has pushed things to an extremel.

“The climate for the free exercise of journalism has been tainted by the extreme polarization that Catalan politics and society is experiencing. The desire for the region's government to impose its narrative on the local, Spanish and international press has crossed red lines, and intimidatory manoeuvres from the central Spanish government do not help. Both parties need to understand that the best sign of the democracy they say they are defending is a free press, with journalists working on information and not what ‘they say’ or through self-censorship,” RSF’s head of the EU and Balkans said.

Articles containing information about the vote are followed by a number of highly active and organized social media users from the pro-independence camp who pay “particular attention to articles on the issue written by foreign correspondents in Spain” RSF wrote. One correspondent for German media in Barcelona said that comments with “corrections” are often directed to her on social networks when she writes stories on the subject, while others in the media recalled being met with insults in response to articles deemed to be negative towards the independence movement.

Reporters also complained about excessive attention from pro-independence politicians or press heads, including being sent Whatsapp messages from communications staff containing links to “recommended articles” that are favourable towards the independence process.

Attacks from anti-independence trolls and the far-right in Spain were also highlighted by journalists. Though perceived to be less organized, that group was said to have a greater tendency to be violent. “I personally know colleagues who received death threats and I’ve been insulted and threatened,” French journalist Elise Gazengel said.

Catalan journalists working for outlets that oppose independence told of organized harassment campaigns from pro-independence users on social networks, which RSF warned could be leading to self-censorship.

RSF also criticized visits from Guardia Civil agents to several Catalan media outlets on September 15th where they were told that they would be criminally responsible if they spread publicity or propaganda related to the October 1st referendum. Police officers asked journalists to identify themselves and took photographs of their national identity documents.

“RSF believes police should be very clear about the line separating the requirements – in accordance with judicial rulings – demanded of media carrying out publicity and propaganda about the referendum from the persecution of those who defend it ideologically and through their editorial line.”

The non-profit also said it was concerned about complaints from TVE journalists in Catalonia who claimed information was being manipulated by the broadcaster in their coverage of protests that broke out in response to the detention of key members of the team organizing the independence vote. Employees complained that “wide shots reflecting the large-scale gathering” were avoided in broadcast and “shots from early in the morning with almost no people were re-used”.

READ ALSO: Protesters gather in Barcelona after referendum is dealt a blow