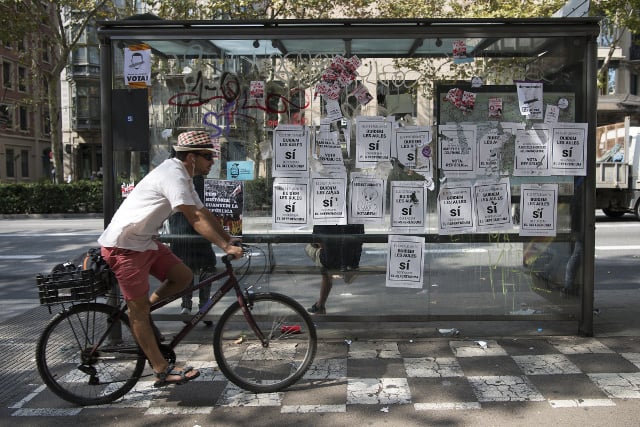 Posters about the referendum in Barcelona. Photo: Josep Lago/AFP

The seizures are the latest in a long list of items confiscated by police as Madrid pulls out the stops to prevent the northeastern region from staging the vote on Sunday.

These are the first ballot boxes to be seized by police in the crackdown on the referendum.

The source said the company involved alleged the ballot boxes were “for elections at FC Barcelona,” without giving further details.

A spokesman for the football club confirmed that the company had indeed provided FC Barcelona with ballot boxes for elections of its president in the past, but could not comment further.

Catalonia is deeply divided over independence, but an overwhelming majority of people want to vote to settle the matter once and for all, polls show.

The Constitutional Court, though, has ruled the referendum illegal, which is why Madrid is trying to stop it at all costs, using the legal means at its disposal.

Apart from items like ballots and propaganda posters seized, key members of the team organising the referendum were detained last week and then set free pending further investigation.

This sparked angry protests in Barcelona, other Catalan cities and even Madrid.

Websites promoting the referendum have been shut down, and thousands of police have been deployed to help guard polling stations and stop people from accessing them on Sunday.

But Catalonia's separatist leaders have vowed the referendum will go ahead come what may.

“We can go back and print ballot papers as many times as needed, we have the electoral roll, ballot boxes and there will be polling stations,” Raul Romeva, in charge of foreign relations for the Catalan government, told AFP
this week.