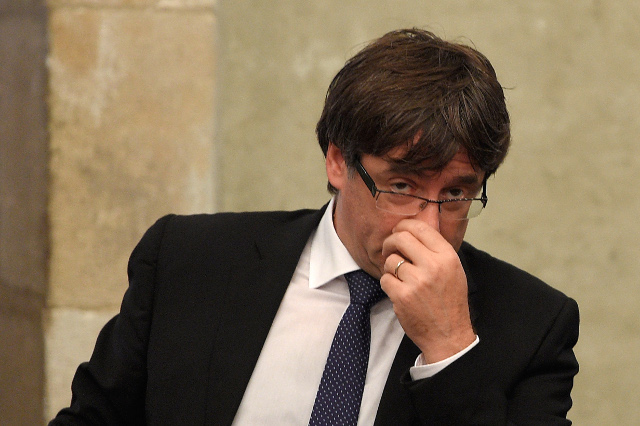 1. Born in 1962, Puidemont was named after his grandfather, Carles Casamajó, who fled to France at the end of the Spanish Civil War and lived at various refugee camps before disappearing in 1943. The family hasn't found any trace of him since.

2. The 54-year-old hails from the town of Amer in the hills west of Girona, where textiles are the dominant industry. Politics aside, his family is best known locally for its patisserie, which is famous for its capricis, a kind of biscotti.

3. Puigdemont's uncle Josep was mayor of Amer between 1979 and 1983. The younger Puigdemont’s first taste of politics came when he helped found the Girona district of Joventut Nacionalista de Catalunya (JNC), the youth branch of the Catalan European Democratic Party in the early 1980s. Around that time he was also caught in a serious accident while driving from Girona to Amer, when his Seat Marbella collided with a truck. Though he “miraculously” survived despite serious injuries, the Catalan President still has scars from the collision to this day.

4. A journalist by trade, he started out writing reports on football for newspaper Los Sitios at the age of 14. A few years later, he dropped out of his degree in philology at Girona University College because his journalistic work for newspaper El Punt Diari (now El Punt Avui) was too time-consuming.

5. It proved a wise move, as the Amer native would eventually end up editor in chief of El Punt. During his time at the newspaper he took a sabbatical year to travel Europe. The result, published in 1994, was his book “Cata…what? Catalunya as seen by the international press”, which looked at the understanding (or lack) of Catalonia abroad in the build-up to the Barcelona Olympics.

6. A multi-linguist, Puigdemont speaks English, French and Romanian on top of his native Catalan and Spanish. He learned Romanian through his wife, Marcela Topor, who he met while she was visiting a festival in Girona, then later went to visit in her native Romania before convincing her to relocate to Spain.

He is also one of the founders of English language news paper Catalonia Today, as well as founder and former director of the Catalan News Agency, a media agency owned by the Catalan government with international branches in Berlin, Brussels, London, New York and Paris.

7. Through a close friend of former FC Barcelona President Joan Laporta, Puigdemont is a supporter of local team Girona FC, who won promotion to La Liga for the first time in the club's history in the summer of 2017. He can sporadically be seen in the club's executive box during match days.

8. Puigdemont’s political career started relatively late, in 2007 he was elected as a member of the opposition at Girona City Hall, before being elected mayor four years later and breaking Socialist rule that had stood there since 1979.

Opinions of his time as mayor are mixed: critics say he isn't present enough in day to day life, spending most of his time away in Barcelona. Admirers praise him for helping to convince Game of Thrones to film in Girona, as well as for funding the archiving of art critic Raael Santos i Torroella's collection which includes original work by Joan Miro and Pablo Picasso.

9. In 2016, the Girona Mayor won a vote of confidence in the Catalan parliament to be named new President. He had not been one of the favourites, and emerged at the eleventh hour to end a three-month political stalemate after the various member parties in the pro-independence Junts pel Sí struggled to agree on a candidate to preside over their government.

10. Politically, Puigdemont has been defined as somewhere between a centrist and a social democrat, who appeals more to those on the left of centre than previous Catalan President Artur Mas thanks to his relatively humble upbringing in Amer away from the Barcelona bourgeoisie.