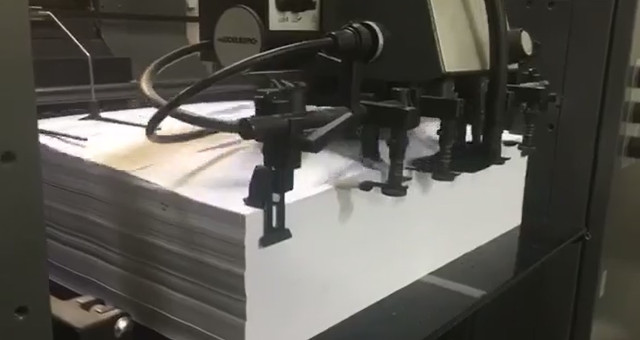 A screenshot of the video.

The video, sent to The Local by a member of the Sitges branch of pro-independence organization the Catalan National Assembly (ANC), shows a printing press printing hundreds of ballot papers to be used in Sunday's plebiscite, which the Spanish government wants to prevent from happening.

“None of us know where it is,” the ANC member told The Local when asked about the location of the press. Police have seized close to ten million ballot papers and other items destined for the vote in the build-up, while pro-referendum campaigners have been using groups on Whatsapp and other messenger services to share instructions and information about the October 1st vote.

Catalan regional President Carles Puigdemont also shared the video through his official Twitter page on Thursday along with the caption “Minerva against Anubis”. Minerva is the Roman goddess of wisdom, while Anubis is the Greek name for Egypt’s god of the afterlife, as well as the codename Spain's Guardia Civil gave to a raid on Catalan government headquarters on September 20th.

On Wednesday, Catalan police warned that public disorder may erupt after Spain ordered authorities to seal polling stations to prevent the referendum on independence from taking place.

Polls show people in the wealthy northeastern region are divided on the issue of independence, but a majority want to vote in a legitimate referendum to settle the matter.