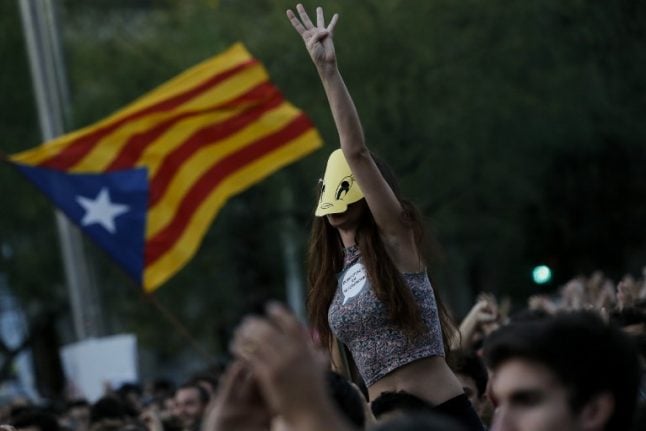 A woman with a Tweety Pie mask raises her hand with an Estelada (Pro-independence Catalan flag) in the background during a campaign meeting for a banned independence referendum on September 27th. Phot

The Catalan government has vowed to press ahead with Sunday's plebiscite despite a crackdown by Madrid which wants to prevent a vote deemed unconstitutional by the courts.

The referendum has deeply divided the wealthy northeastern region which is home to some 7.5 million people and accounts for about a fifth of Spain's economy.

Late on Tuesday, Catalonia's chief prosecutor ordered the force to seal off buildings that will house polling stations before Sunday's referendum which Madrid has declared illegal.

But such a step “could lead to undesirable consequences,” the Mossos d'Esquadra warned in a posting on Twitter on Wednesday.

“These consequences refer to public security and to the more than foreseeable risk of a disruption of public order that this may generate.”

The prosecutor also ordered police to deploy officers on the day of the ballot to prevent people from voting.

The order puts intense pressure on the regional police who are caught between their loyalty to local Catalan leaders who are pushing ahead with the referendum and their pledge to uphold the law.

The Catalan government has said it will set up nearly 2,700 polling stations, the same amount as in the last regional elections in 2015.

The region's interior minister Joaquim Forn said the measures demanded by the prosecutor were a “huge mistake”.

“They are likely to prevent people from voting in big cities” which will greatly reduce the number of voters meaning the ballot will have as little legitimacy as possible, a senior judicial source said.

Ignacio Gonzalez, a spokesman for Judges for Democracy, said it was “feasible” for police to seal polling stations.

“The problem is the unrest that this could cause,” he told AFP.

Meanwhile, Spain's High Court accepted a complaint for sedition filed by prosecutors against the organisers of protests in Barcelona last week.

Several officers from the Guardia Civil police force were unable to leave a Catalan government building after conducting searches due to the mass of demonstrators outside.

Pro-independence Catalan high school students began a strike on Wednesday and pledged to occupy their schools, which could serve as polling stations.

Adding to the tense atmosphere, the CGT, a small anarchist union, is calling for a general strike in the region from October 3 if the plebiscite does not go ahead.

But Spain's two main trade unions, the UGT and the CCOO, have distanced themselves from this call.

Prime Minister Mariano Rajoy's conservative government is facing mounting criticism over its handling of the crisis.

In a harshly-worded editorial, the top-selling El Pais daily denounced “the absence of government” and an attitude it said was “disconcerting, inadequate and close to irresponsibility”.

“It is up to the government and not to the prosecutor to explain, day after day, what it is doing, what measures it is taking and is about to take.”

In a comment piece, Catalan author Eduardo Mendoza, one of Spain's best-known writers, criticised the “limited” intellectual capacities of the government.

“It scolds, calls to order and threatens, obtaining a result that is completely contrary to what is sought, insofar as it is seeking to find a solution and not to raise tensions for election purposes,” he wrote in El Pais.

“We are perhaps living in an unprecedented historical moment because of the determination of certain separatists to deny centuries of shared history between Spaniards,” she told parliament.

Madrid's opposition to the Catalan independence referendum drew a sharp rebuke from the Basque separatist group Eta, which released a statement accusing the state of being “a prison for the people”.

Eta led a decades-long campaign of violence for an independent Basque, resulting in the deaths of 829 people.

The Catalan crisis has had a knock-on effect on other government business with Rajoy withdrawing from an informal summit of EU leaders in Estonia on Friday and saying the government would delay its presentation of the 2018 budget.