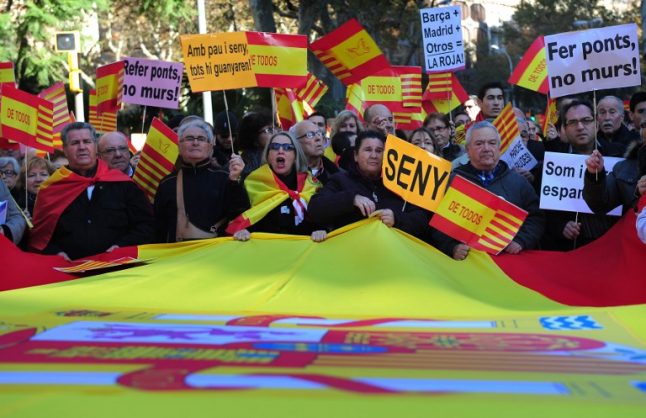 It's a rarity in this region of northeast Spain where many against separating from the country prefer to remain silent just days before the vote banned by Madrid and the courts.

“Many people think like I do, but they don't dare say so,” says this 52-year-old retired construction worker in the small town of La Canonja.

“All of this is a sham, they say everything will be great with independence, a bed of roses. But it will be really complicated, there will be more expenses and let's see what happens with the economy, companies, pensions.”

In 2015 regional elections that gave separatists an absolute majority in the Catalan parliament, just 23 percent of voters in this 5,800-strong town opted for secessionist parties.

Fear of being singled out

But on the streets, it doesn't appear that way. Separatist flags, banners marked with “Yes” or messages with the word “democracy” are posted in the old town centre where many independence supporters live.

Further afield, in districts of houses and blocks of flats where workers from other parts of Spain settled in the 20th century, attracted by the area's industrial might, there are but a handful of Spanish flags.

Polls indicate roughly half of Catalans are against independence.

But unlike separatists who often stage huge rallies, those against independence organise few protests and those that take place are often called by far-right groups.

That's why many opposition leaders in Catalonia refer to a “silent majority.”

In La Canonja, “separatists are few and far between but they're very loud,” says Filgueras, whose parents were from the southern region of Andalusia.

“And as the others don't say anything for fear of being singled out, they put us all in the same boat — 'Catalans want independence'. Well I don't, I'm Catalan, I'm Spanish and I want to remain that way.”

Several other residents refuse to talk or give their name.

“I prefer avoiding problems, look at what happened to Serrat,” one says, referring to the famous Catalan singer Joan Manuel Serrat, criticised after questioning the way the Catalan government called the referendum by breaking regional parliamentary rules.

“If you support the 'no', it can seem like you agree with (Spanish Prime Minister Mariano) Rajoy and that's not the case. For me, he has made the situation worse,” says Joaquin Gonzalez, a 35-year-old warehouse assistant.

“But breaking away is not the solution. I don't want this to end up like the USSR or Yugoslavia, with all those small countries.”

In the town hall, Roc Munoz, the mayor for 20 years, says people are “fed up” with an issue that reared its head in 2012 when the regional government started asking for a referendum — a demand repeatedly rejected by Rajoy.

“People here aren't in favour of these things. We have an enviable economic situation and citizens don't need adventure, or a grand and independent Catalonia,” he says.

Paradoxically, the town's financial health came in 2010 when it separated from the nearby city of Tarragona, of which it had been a district since 1965.

“We did it completely differently. We didn't go clashing with authorities and the law,” says Munoz, adding he went all over the region to get the necessary support to make his town “independent.”

Munoz won't open up any municipal voting premises on Sunday, just like many mayors who belong to the Socialist party and are against the referendum, some of whom have been criticised and threatened as a result.

In La Canonja, ballot boxes are due to be set up in a public institute managed by the regional government, although whether it will open and what the participation will be remains to be seen.

A majority of those against independence are opting for abstention.

“It's not a secure vote, those who organise it are those who want independence, they will count the votes themselves and they only want us to go so that it seems like a real referendum.”