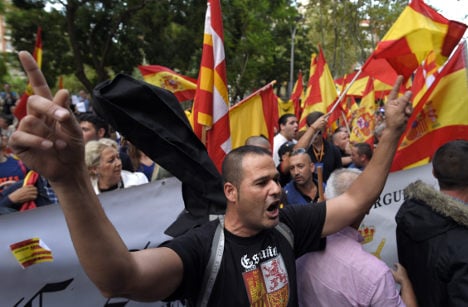 The issue has the entire northeastern region split roughly down the middle, with the most recent poll commissioned by the regional government in July finding that 49.4 percent of Catalans were against independence while 41.1 percent were in favour.

Sheltered from the rain in his flower stall in Nou Barris, Ignacio Perez watches with annoyance as a bus passes bearing the slogan “Hello Republic”, part of the “yes” campaign for the referendum on October 1 that Madrid is trying to stop at all costs.

“That bothers me,” the 63-year-old florist said.

“It's relentless, always the same, but those aren't people's problems. If only they put the same effort into bettering the health system, education or employment.”

If it weren't for the poster, passers-by could be forgiven for forgetting that Catalonia is in the midst of a push for independence driven by its separatist leaders – so few are the signs in this working-class district of
Barcelona.

Nou Barris is where many immigrants from other parts of Spain settled last century, and Spanish – not Catalan – dominates conversations here.

Spanish flags fly from its high-rises, not the yellow, red and blue separatist banners often seen in other parts of this wealthy, 7.5-million strong region.

Separatists secured an absolute majority in the Catalan parliament after regional elections in 2015, though they got just 47.6 percent of the vote.

Regional president Carles Puigdemont has said he will start taking steps towards separating from Spain if the “yes” wins the day on October 1st, regardless of the turnout.

But how that would work remains unclear given the anti-constitutional nature of the vote and Madrid's opposition.

“With such a paltry majority and with a minority in society, you can't launch such a process,” Perez said.

“You can't break up a country with so little support.”

In Nou Barris, the separatist vote in the 2015 elections reached just 29.1 percent while parties against independence won 53 percent.

“They have imposed their plan on us, taking advantage of the fact that those of us against independence are not united and have not mobilised,” said Ana Bahamonde, 52.

The customers at her bakery, she added, prefer not to discuss the issue.

“It's badly looked upon to say you don't want independence, it equates you with the far right. That's why I don't go to protests for unity.”

Bahamonde also said she would not vote in the referendum.

“I'd like to vote in the right way, but not like this,” she said, reflecting results in the July opinion poll which showed that more than 70 percent of Catalans wanted a referendum to settle the matter.

Over in Gracia, however, things are radically different.

A former summer village for Barcelona's elite, it was annexed by the Mediterranean city at the end of the 19th century and is now one of the most fashionable districts.

Along its pedestrian streets, separatist flags adorn houses as do “Yes” signs. Here, separatists won 60.5 percent of the vote in 2015, the highest score in Barcelona.

“I don't understand that they don't want to go vote,” said Soledat Farre, a 59-year-old who works in sporting events, as she prepared electoral information in an office of the Catalan National Assembly (ANC), a powerful pro-independence civil association.

“I understand that they want to stay in Spain, but they should go vote,” she said, adding: “If everyone went, I think it would be difficult for us to win.”

Police detained 14 Catalan government officials on Wednesday and seized nearly 10 million ballots in their bid to stop the referendum, sending thousands of protesters into the streets of Barcelona.

“I don't understand this closed-mindedness. They don't listen, they don't want to understand. They see us simply as subjects that must obey and that's it,” said Ignasi Tort, a 50-year-old computer specialist.

He said he became a separatist in recent years as tensions between Madrid and Catalonia mounted, but hoped the region could reach a new deal to be able to remain a part of Spain.

Tort said he was now “disenchanted”, especially after seeing the “shameful” crackdown launched by Madrid to stop the referendum, which has raised doubts about whether it will indeed take place.

“With this you realise independence is the only way out,” he said.

From his flower stall in Nou Barris, Perez worries that the situation could deteriorate.

“If in the end the referendum doesn't take place, or it's useless because it isn't legal, this will generate a lot of frustration and the atmosphere could get bad.”