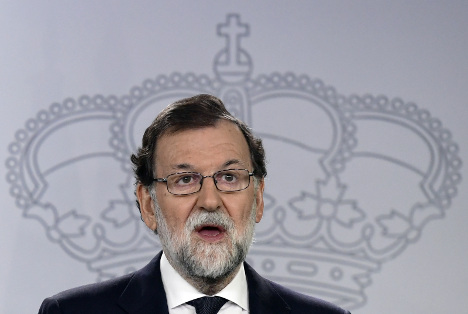 “It would be sensible, reasonable and democratic to stop and say, there won't be a referendum, which they know won't happen,” Rajoy told members of his conservative Popular Party at an event in the Balearic Islands.

Madrid has used all the legal arsenal at its disposal to stop the vote from taking place on October 1st in a region deeply divided over independence.

Catalan leaders, however, say they are still determined to see the referendum through even if they recognise their plans have been seriously hindered.

Key members of the team organising the vote are being investigated for disobedience, embezzlement of public funds and malfeasance.

Prosecutors are pushing for possible sedition charges against leaders of protests in Barcelona on Wednesday.

These included members of an electoral board set up for the referendum which was subsequently hastily dissolved by the regional government.

These include the Mossos d'Esquadra, regional police normally managed directly by the Catalan interior department whose chief Joaquim Forn retorted it was an attempt to take over command of the force which they would not “accept.”

All these measures have damaged separatist plans to conduct a referendum with a semblance of legitimacy, even if it was never going to be recognised by Madrid.

Still, Catalonia's President Carles Puigdemont on Saturday posted another link to a website that lists places where Catalans will be able to vote, after others were taken down.

On the streets of Barcelona, meanwhile, protests had dwindled on Saturday.

Several dozen students were still rallying in a University of Barcelona building in the city centre, but other street gatherings had dissolved.

Polls show Catalans are sharply divided on whether they want independence or not, with the latest survey in July showing 49.4 percent against and 41.1 percent in favour.

Despite the divisions, a large majority of Catalans want to vote in a legitimate referendum to settle the matter.