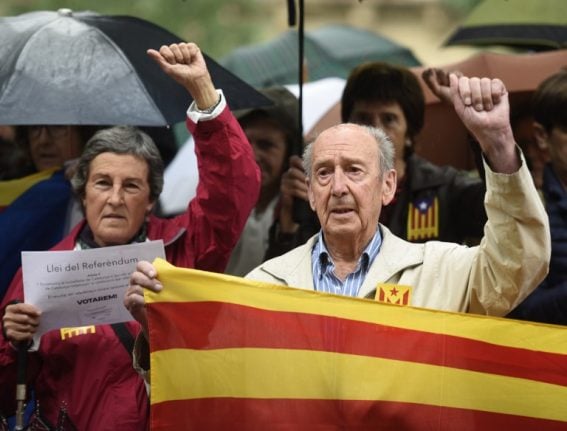 People hold pro independence Catalan flags as they take part in a demonstration to support the Catalan referendum in the Spanish Basque city of San Sebastian. ANDER GILLENEA / AFP
Organisers said 35,000 people rallied in the northern city of Bilbao — a symbolic protest in a region still marked by decades of violence once waged by armed separatist group ETA, and where the desire for independence remains strong.
The march comes just two weeks before Catalonia's separatist executive is slated to hold a referendum on October 1st despite a ban by Madrid. Spain considers the vote illegal, as does its Constitutional Court.
SEE ALSO: Nine key pitfalls of Catalonia's independence referendum
Waving the red, blue and yellow Estelada flag used by those who want independence in Catalonia, and red, white and green Basque regional flags, protesters marched under threatening skies. They carried a large banner filled with “Yes” slogans, referring to the answer Catalan separatists want to give in the referendum that will ask voters whether they want the region to become an independent republic.
Jasone Agirre Garita, a regional lawmaker, said protesters wanted “to demonstrate they are for democracy and for the basic right to decide.”
“They want to denounce the anti-democratic attitude of the Spanish state,” she added.
The protest was called by Gure Esku Dago, an organisation that pushes for Basques to be given the right to decide on their future. Arnaldo Otegi, a veteran leader in the northern region who was once part of ETA and now heads up Sortu, a party that campaigns for independence, was also present at the march.
Madrid has pulled out all stops to prevent the Catalan referendum from going forward, including threatening to arrest mayors who facilitate the vote, ordering police to seize any item that could be used for the plebiscite and tightening control over the region's finances.
It says the Constitution stipulates that a Spanish region does not have the right to call a referendum.