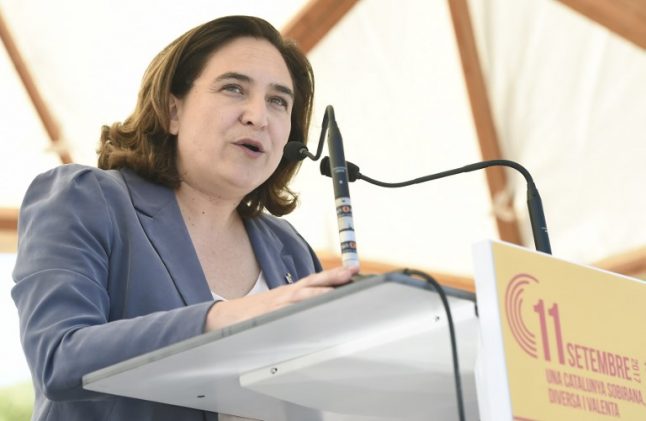 Barcelona mayor Ada Colau has expressed "solidarity" with pro-referendum mayors but her plans for letting residents vote are unclear. Photo: Josep Lago/AFP
The tense situation is but one illustration of the passions raised by the drive for independence in a region that remains sharply divided over whether it wants to separate from Spain.
On Saturday, more than 700 pro-referendum mayors protested in Barcelona, brandishing their maces and singing the official hymn of the northeastern region, whose separatist executive is preparing to hold a referendum on October 1st.
SEE ALSO: 'We will vote' say 700 Catalan mayors in referendum protest
Resolute and calm, they made light of the risks they are taking after Spain's public prosecutor ordered a criminal probe and threatened to arrest them if they refuse to comply with Madrid's order not to hold a vote deemed unconstitutional.
Supporters also took part, shouting “we are with you,” and Barcelona Mayor Ada Colau and Catalan President Carles Puigdemont met them.
“I'm not protesting in support of independence but in support of voting,” said Josep Sole, the 74-year-old mayor of La Maso, a small 300-strong village in southern Catalonia.
'Want to express themselves'
Sara Janer, the 26-year-old mayor of the small village of Pontils, said she had been elected to “listen” to her residents.
“If the Catalan government gives us the opportunity to express ourselves, we should get the ballot boxes out,” she said. “Catalans really want to express themselves, that's for sure.”
With a majority in the Catalan parliament since 2015, the separatists are bent on holding the referendum. But Madrid is pulling out the stops to stop it going ahead. On top of legal threats to mayors, police have also been ordered to seize any items that could be used for the vote.
Puigdemont has said he will start taking steps towards separating from Spain if “yes” wins the day on October 1, regardless of the turnout.
How that will work remains unclear given Madrid's determination to stop the separatists.
Catalonia, however, remains sharply divided. The most recent poll commissioned by the regional government in July showed 49.4 percent of Catalans were against independence while 41.1 percent supported it.
At the protest, Colau clearly expressed her “solidarity” with the pro-referendum mayors. But in her 1.6 million-strong city where separatists are in the minority, she did not join them in shouting “Long live a free Catalonia”, “We will vote” and “Independence.”
“We will build the future with the mayors who are here and with the others,” she said.
Many big, populated cities have refused to cooperate for the referendum. Colau herself has said she will let people vote “without putting institutions or public workers at risk,” though how that will happen remains unclear.
Central government spokesman Inigo Mendez de Vigo warned her: “You're with the law or against it… You can't just leave the keys saying 'I don't want to know'.”
Online threats
Conservative Prime Minister Mariano Rajoy governs Spain without a majority, having won 33 percent of votes in general elections in 2016 — and just 13 percent in Catalonia.
Only two mayors in the entire region the size of Belgium are from his Popular Party. Ciudadanos, Catalonia's main opposition party, has none. That means the onus of denouncing the referendum falls on the anti-independence Socialist party and its 122 city and town halls. And they say they are feeling the heat.
“I'm suffering from really aggressive pressure, mainly in social media — dozens of insults of all kinds coming from anonymous accounts,” Angel Ros, mayor of the 125,000-strong Lerida, told AFP, pointing to a “tense and worrying situation.”
Nicolas Viso Alamillos, the Socialist mayor of the small town of Baga, has also been threatened online.
“They said they would take my car, my house, and that they would shoot me,” he said, though he has no problems on the streets of his town.
Mayor Eva Martinez, meanwhile, says the pressure from both regional and central government has become “intolerable” for local elected officials and municipal workers in her town of Vallirana.
By AFP's Laurence Boutreux with Riwan Marhic in Madrid