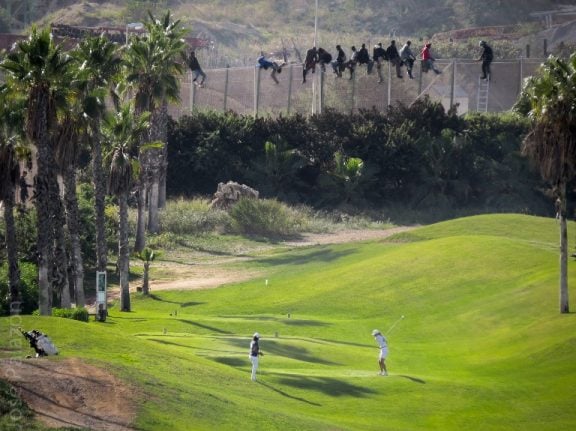 golfers playing from a fairway back-dropped by African migrants sitting atop a border fence in Melilla. Photo: Prodein/AFP

Juan Ignacio Zoido unveiled the plans to boost border security at Melilla and Ceuta during a parliamentary commission this week when he revealed that migrant arrivals had soared by 88 percent this year.

Zoido said that this year had seen a rise in co-ordinated attempts to break through the six-metre-high double fences topped with razor-wire that line Europe’s only land borders with Africa.

So far this year, some 9,000 migrants – mostly from sub-saharan Africa – had attempted to force their way into the Spanish territory compared to 613 in the same period in 2016, he said.

“There is a constant trickle of people attempting to break through Ceuta's fence,” he said insisting that  the current fence was proving insufficient .

The double fence in Ceuta, which was first built in 1999 and increased in height from three to six metres (10 to 20 feet) in 2005, “doesn't fulfil the purpose for which it was once built”, he said.

“The migrants use tools such as clubs, metal cutters or hooks to break doors in the border fence and cut or climb over the fences,” he said.

The Spanish government will spent some €12 million ($14.4 million) during the course of next year to boost security at the border fence between Morocco and Ceuta.

READ ALSO Trump's wall: Spain shows why US president is heading for trouble.