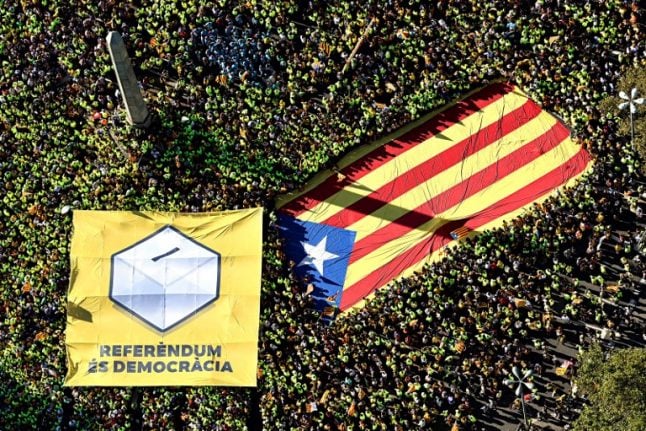 Hundreds of thousands turned out for La Daida on Monday. Photo: AFP

The campaign kickoff will take place at 8:00 pm (1800 GMT) at a 10,000 seat capacity bullring in the port of Tarragona, attended by Catalan president Carles Puigdemont and representatives of Catalonia's main separatist parties and associations.

But there were doubts whether the rally will be able to go ahead after a judge banned another pro-independence event in Madrid on the grounds that a public space could not host a meeting to promote an illegal referendum. Asked during a TV interview if an operation was under way to stop the event in Tarragona, Spain's Deputy Prime Minister Soraya Saenz de Santamaria said: “You can't cooperate and you can't participate in this referendum.”

A manager for the company that runs the bullring, who did not want to be named, told AFP they had not received any official request to not let the rally go ahead.

The pro-independence camp has two weeks to fire up its base and win over its critics who are reluctant to take part in the referendum set for October 1st.

If they win the separatists vow to declare independence within days for the wealthy northeastern region of Spain, with its capital Barcelona, which is home to around 7.5 million people.

The Catalan government has not established a minimum participation for the outcome of the referendum to be valid but a high turnout is key for the legitimacy of the vote.

Pro-separatists are a minority in Tarragona, the capital of a province with the same name with a population of around 130,000, and several chemical and oil refineries.

The city's Socialist mayor, Josep Felix Ballesteros, has refused to provide facilities for the referendum.

Parties that oppose secession will not take part in the campaign for the referendum, which was declared illegal by Spain's Constitutional Court, and have asked their supporters to boycott the vote.

“This is a trick,” Salvado Illa, the secretary of the Catalan Socialist party which opposes the referendum, told AFP.

“They want to stage a mock referendum to justify a declaration of independence. They want people to turn out to legitimise results which they already know beforehand.”

Spain's conservative Prime Minister Mariano Rajoy, who will travel to Barcelona on Friday, has also urged Catalans to stay away from the poll.

“If anyone urges you to go to a polling station, don't go because the referendum can't take place, it would be an absolutely illegal act,” Rajoy said Wednesday.

Spanish state institutions are ratching up the pressure on Catalan officials to stop the referendum.

Spain's public prosecutor has ordered a criminal probe of the over 700 Catalan mayors who have so far agreed to help stage the referendum and threatened to arrest them if they do not turn up for questioning in court.

Prosecutors have also ordered police to seize ballot boxes, election flyers and any other item that could be used in the referendum and launched an official complaint against Puigdemont and other top Catalan officials over their referendum plans.

Against this backdrop several Catalan newspapers such as La Vanguardia, El Periodico and even the pro-secession Ara, have declined to run adverts for the “Yes” side, which are only being broadcast on Catalan public radio and television

The pro-separatist camp argues that the attempts by Madrid to stop the referendum may in fact boost support for their cause.

“The attitude of the state is so aggressive that no democrat can remain indifferent,” Ramon Pique, the coordinator of the campaign of the Catalan National Assembly, an influential pro-independence citizens group, told AFP.

“If they force people to choose between democracy and police, the choice is clear.”