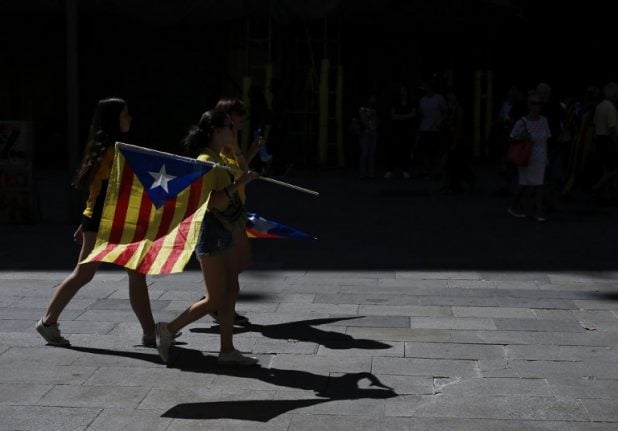 Anna Comellas, 20, drapped herself in a red and yellow Catalan independence flag at the event in Barcelona, which comes ahead of an October 1st independence referendum called by Catalonia's pro-separatist government which Madrid deems illegal.

It is the fifth consecutive year she has taken part in celebrations for the “Diada”, Catalonia's national day, which has in recent years been used as a show of force by the pro-separatist camp in the wealthy northeastern region's. Comellas, a brown-haired student who wants to be a teacher, is the granddaughter of a supporter of General Francisco Franco's 1939-75 dictatorship, which repressed the use of the Catalan language.

Her parents are not separatists, but she said she became a supporter of the cause through her interaction with her classmates at school, where all subjects “except foreign languages” were taught in Catalan.

“Time passes and people become more and more aware that remaining in Spain harms us,” she said at the rally.

Comellas said she learned at school that Catalonia contributed more in taxes to Spain's central state than it received back in investments and services, a key argument of the pro-separatist parties which have controlled the Catalan regional parliament since 2015.

Her father teases her for being a “red” because she votes for the far-left separatist party CUP.

“Our parents' lives are settled, they don't need change, but we know what we can expect,” she said in a reference to the effects of Spain's economic woes which have dampened young people's aspirations.

Cristian Par, a 21-year-old from Barcelona, attended the march in a souvenir T-shirt from the 2013 “Diada”, which saw pro-separatist Catalans form a 400-kilometre (250-mile) human chain across Catalonia.

“I love seeing the unity, the respect we have for one another. It is the only thing we want, that we be respected,” he said.

He said his mother learned to speak Catalan after she moved to the region from Argentina and became a supporter of independence.

“When I was 15, 16 I read the news and I realised that it would be best to be able to build our own state, to have resources and be respected as a culture,” said Par, before adding that he did not feel “connected to Spanish culture”.

Laura Alberch, a 25-year-old journalist who came to the march from Vic, a separatist stronghold about 75 kilometres north of Barcelona, said she had made up her mind in reaction “to how Madrid treats us”.

She said some of her ancestors were killed during Spain's 1936-39 Civil War by Franco's forces and her parents were Catalan nationalists.

“We are in the 21st century and this constitution which says that the referendum is illegal is from 40 years ago: times change,”  Alberch said, referring to Madrid's argument that Spain's 1978 constitution does not allow regions to call a referendum.

Young Catalans are also more politically active thanks to social networks, she added.

The latest survey by the Catalan Centre of Opinion Studies released in July showed that support among 18- to 34-year-old Catalans for the “Yes” side in the referendum was slightly higher than for the “No” camp.

“Young people are a bit more pro-independence” than their elders, said Pablo Simon, a professor of politics at Carlos III University in Madrid.

Many Catalan youths have come of age since the surge in support for separatism in Catalonia began in 2010, he said.

Those under the age of 35 “are going to have a propensity to be more separatist, or at least be more polarised,” Simon said.

But not all young people back independence, even if they are in favour of holding a referendum, as is an overwhelming majority of Catalans.

“I don't like patriotisms, from one side or the other,” said Cristina Sanchez, 21, at a meeting near Barcelona of the far-left party Podemos.

Sanchez, whose parents moved to Catalonia from the western region of Extremadura, said she would vote “No” in the referendum if it takes place.

“I feel Catalan…and Spanish,” she said.