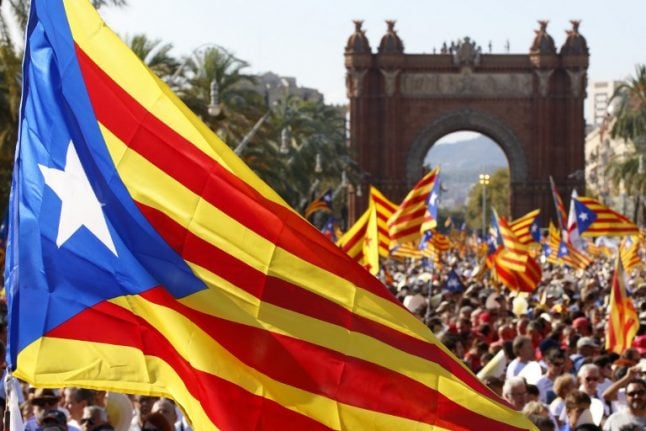 Catalonia's National Day, known locally as La Diada Nacional de Catalunya, is a festa (festival) held in the region every year on September 11th. It has always been an occasion to celebrate Catalan culture and customs but the recent debate over Catalonia's right to vote on independence from Spain has transformed it into a politically charged event.

But why do Catalans celebrate la Diada? What happens during the festival? Read on to find out 7 things you need to know about the big day…

1. It commemorates a famous defeat

Very unusually for a massive holiday, la Diada marks the occasion of a military disaster. Catalan troops fighting the Bourbon King Philip V of Spain during the War of the Spanish Succession were finally defeated on September 11th 1714 after the 14-month Siege of Barcelona. The surrender marked the dissolution of autonomous Catalan institutions, the removal of Catalan as an official language and the imposition of new laws from the newly centralised Spain. The march starts at 17.14 to commemorate the date.

2. It was banned by General Franco The first celebration of La Diada took place in 1886 but it was officially suppressed in 1939 and throughout the dictatorship of Francisco Franco. The Catalan regional government reinstated the fiesta in 1980, five years after Franco's death.

3. It is a tribute to lost Catalan lives

4,000 people died defending the city during the Siege of Barcelona and are buried in a cemetery near the Santa Maria del Mar church in the Gothic Quarter. A memorial plaza, the Fossar de les Moreres, now covers the cemetery and thousands of Catalans lay flowers there every year on La Diada. La Senyera, the Catalan flag of four red stripes on a yellow background, is everywhere on La Diada. Giant versions are hung across entire buildings while innumerable smaller versions flutter from balconies or are draped across cars. A high percentage of people walking the streets either wear or carry a version of the flag, although many versions on sale are now rather unpatriotically made in China. A slightly different flag, la estelada, has surged in popularity in recent years. It features a white star on a blue triangle (or sometimes a red star on a yellow triangle) over the senyera's red-and-yellow stripes and is the unofficial symbol of the Catalan independence movement.

5. It's getting more popular Crowds gathering in Barcelona ahead of the start of rally on La Diada. Photo: AFP

La Diada has always been a magnet for supporters of Catalan separatism. For many people the day is a simple celebration of their Catalan identity but many others use the occasion to express their political feelings. The numbers of those joining peaceful protests have surged in recent years after the Spanish Constitutional Court rewrote the Catalan Statute of Autonomy to severely limit the region's power. The first mass demonstration was held in 2012 when between 600,000 and 2 million people (depending on whose estimates you believe) gathered in Barcelona to demand independence from Spain. The following year, approximately 1.6 million people joined hands to form an unbroken human chain across the whole region. Last year organizers claimed more that 1 million people joined the demos, which came just 20 days ahead of a referendum on independence.

6. Mobilizing for the Republic Quim Torra, regional president of Catalonia insists the rally marks the start of mobilization for a republic. Photo: AFP

This year's event will have particular significance as a test of strength after a referendum last October 1st, and the Catalan parliament's unilateral declaration of independence on October 27th. Both of which came to nothing.

Organisers are keen to show that the independence movement is stronger than ever and that the region is still committed to breaking away from Spain –    A closely-watched survey by the Catalan government's Centro d'Estudis d'Opinio in July showed 46.7 percent of Catalans want an independent state, just ahead of 44.9 percent who were opposed.

Catalan president Quim Torra said the rally marks the start of a “mass mobilisation”. Further protests are planned for the anniversary of last year's banned referendum, which was marred by clashes between police and voters.

In a televised address on Monday, Torra said his government was “committed to
implementing the republic” Catalans voted for in the referendum. A sign hanging on a balcony of the Generalitat palace in La Diada. Photo: AFP

The rallying cry of this year's Diada will be demands to free the political leaders still behind bars for their roles in organising the illegal referendum and the subsequent unilateral declaration of independence.

Thirteen Catalan leaders have been charged with rebellion, which carries a jail term of 25 years. Still more are in exile, including the deposed former president of the region Carles Puigdemont.

Those separatist leaders in jail or exile over their role in the separatist push, have urged supporters in a joint letter to turn out en masse for Tuesday's rally and not to give in to “provocations from those who seek to divide us”.

This year's Diada will be marked by yellow ribbons, which are used to symbolise the jailed poltical leaders, and posters calling for their freedom.