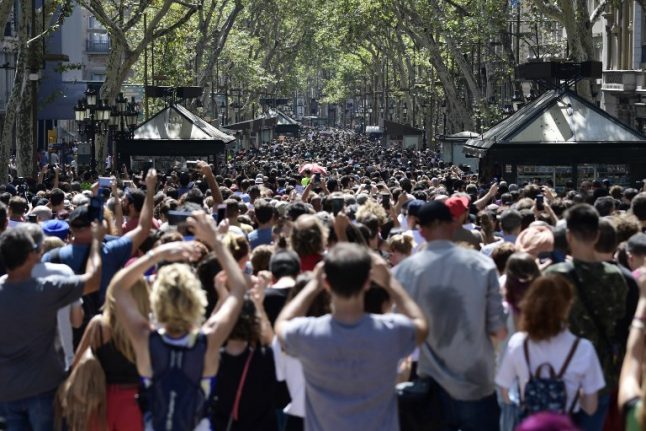 People at the Rambla boulevard after observing a minute of silence for the victims one day after the Barcelona attack that killed 13. Photo: JAVIER SORIANO / AFP
Madrid remains to this day the scene of Europe's deadliest ever jihadist attack, when Al Qaeda-inspired extremists planted a dozen bombs on commuter trains in March 2004, killing 191 people.
Manuela Yela de la Torre, a confectionery vendor whose shop was directly in front of the ramps leading to the platforms at the city's Atocha station, remembers every second of what followed.
“I heard a rumbling noise, an explosion; I saw the turnstiles spinning and people coming out,” she says.
Yet by 6am the next morning she had replaced the ceiling tiles, which had tumbled down in the bombings, and cleaned away the thick layer of dust. She opened the shop as usual.
“If a son or a family member had been killed, that would have been more difficult,” said the 59-year-old, whose friend lost two cousins in the attacks. “But I was on the outside.”
Maria, who lives on the street next to the station, has a similar memory of how quickly things went back to normal in 2004.
“People continued to walk around, to take the train,” said the laundry worker, declining to give her last name. “You have to go back to living, or else you stay stuck in the moment. It's very hard, but you have to move forward.”
Back to politics
On Barcelona's Las Ramblas boulevard, where a 22-year-old rammed a truck into a crowd on August 17, killing 14 people in an assault claimed by the Islamic State group, tourists had likewise flocked back by the following day.
The candles, teddy bears and flowers left for the victims were cleared away by local authorities two weeks later.
“Life is coming back,” said Montserrat Rovira, head of emergency social services in Barcelona, who was tasked with providing psychological support to the families of the victims and others suffering from post-traumatic stress after the attack.
In another sign of the rapid return to reality, political squabbling resumed almost immediately between Madrid and the Catalan capital Barcelona, bitterly divided over a planned independence referendum in the northeastern region.
Despite the sombre occasion, separatist activists jeered King Felipe VI and Prime Minister Mariano Rajoy during a huge march against terrorism that saw tens of thousands of people take to Barcelona's streets.
The 2004 attacks took place three days before general elections, and the carnage heavily influenced the result — toppling the ruling conservatives, who faced damning accusations that their participation in the war in Iraq alongside the US had made Spain a target for jihadists.
The government of then-prime minister Jose Maria Aznar insisted the attacks were likely the work of Basque separatists, even after they were claimed by Al-Qaeda.
“What's most striking compared to the United States or France was the absence of national unity,” said Olivia Munoz-Rojas, a Spanish sociologist based in Paris.
She points to Spain's experience of the ETA insurgency, blamed for the deaths of 829 people over 40 years in its quest for an independent Basque homeland, as one potential reason for citizens' “resilience” in the aftermath of more recent terror attacks.
'Lived through a lot'
“We've lived through a lot of attacks,” said Maria, recalling how an ETA bomb at Atocha station had shaken the floor of her launderette long before the 2004 bombings. “We've internalised it, so we try to get back to normal life as quickly as possible.”
ETA's deadliest attack was in 1987 when it bombed a shopping centre in Barcelona, killing 21 people.
Munoz-Rojas suggested that the fact that Spain lived under a dictatorship for more than three decades until Francisco Franco died in 1975 may also have left its mark.
“Spain was a dictatorship not that long ago, and I think that in these societies people are used to not expressing themselves too much,” she said.
But despite the defiant Catalan phrase that became a rallying cry after last month's Barcelona attack — “No tinc por” or “I'm not afraid” — Rovira said traumatised residents, victims and their families “fear that this could happen again”.
In her sweet shop by the Madrid station, Manuela Yela admits she was scared to come back to work.
“But we say to ourselves, 'It's already happened here, it can't happen again',” she said. “We have to protect ourselves mentally.”
By AFP's Adrien Vicente