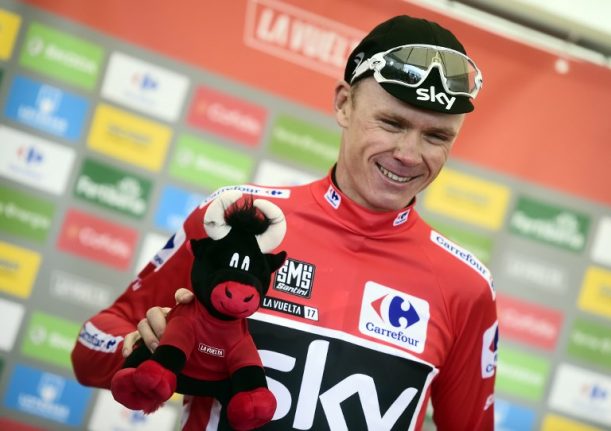 British cyclist Christopher Froome smiles as he sports the overall leader's red jersey on the podium of the 20th stage of the 72nd edition of "La Vuelta" Tour of Spain cycling race on Saturday. PHOTO:
Froome extended his lead over Vincenzo Nibali to 2min 15sec in Saturday's penultimate stage of the Vuelta with only a traditional parade through Madrid to come on Sunday.
The Briton will become only the third rider to ever win the Tour and Vuelta in the same year and the first since the Vuelta was moved to after the Tour in the cycling calendar back in 1995.
“I could only have dreamed to be in this position, to be making history,” said Froome. “To be the first British rider to win the Vuelta. The first rider to win the Tour and go onto win the Vuelta. This is sealing my place in the history of the sport.”
Froome's Tour de France success last month was the fourth of his storied career. However, he had always fallen just short previously at the Vuelta as a runner-up in 2011, 2014 and 2016.
“Each victory is so different. Each victory tells its own story. Today was such an emotional moment,” added Froome, who broke down in tears at the finish line.
“Even more so coming after the Tour de France and having won the Tour, this was an even bigger challenge. It's a huge challenge, a huge undertaking, and to reach the summit knowing I have the victory pretty much secured with just the procession into Madrid tomorrow is just such an overwhelming feeling.”
Filled with brutal mountain climbs like the finale to Alto de l'Angliru on Saturday in conditions varying across three weeks of racing from searing heat in the south to wind and rain in recent days in the north, Froome believes the Vuelta provides an even stiffer test than La Grande Boucle.
“The Vuelta represents a different kind of bike racing. It's more of a physical challenge than the Tour given the number of
mountaintop finishes, the aggression, the conditions we've had.
“We've had days of over 40 degrees, days like today of 10 degrees and raining, days of strong winds. It's really brutal.”
Having come so close to standing atop the podium in Madrid with the leader's red jersey in recent years, Froome altered his entire preparation for the season to target a historic double.
His Tour win was a less spectacular one as he failed to win a stage in seeing off Rigoberto Uran by just 54 seconds for the yellow jersey.
However, backed by incredible support from his Sky teammates, Froome has looked in supreme form in recent weeks, taking both stage nine and individual time trial victory on stage 16.
“The Vuelta is a race I genuinely enjoy doing and I came close last year,” he added. “I believe last year tactically I got caught out in the Vuelta. I won the Tour and finished second in the Vuelta. That gave me a lot of motivation and showed me it was possible to do the double.
“This year I structured my season very differently. I did very few races in the first part of the season and arrived at the Tour a little on the fresh side, not necessarily enough racing in my legs, but that has helped me to be really strong throughout the three weeks here at the Vuelta.”
By AFP's Kieran Canning