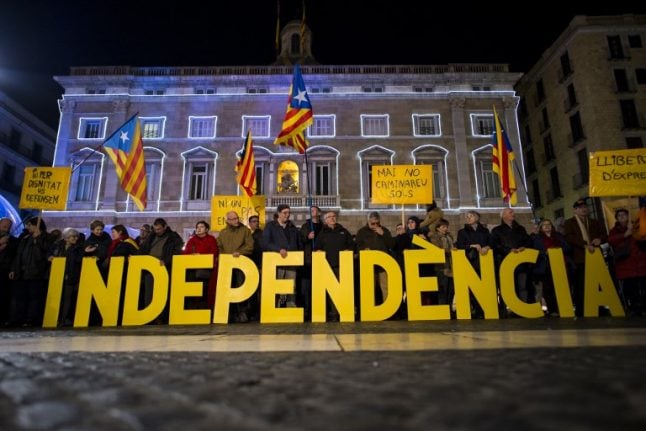 After sparking Spain's deepest political crisis in 40 years by voting this week to move ahead with a referendum, Catalonia's separatist-controlled regional parliament upped the ante by passing a bill in the early hours which would take effect if they won the popular vote on October 1st. The separatists say the law would serve as a temporary “basic law” in the wealthy northeastern region of 7.5 million people in the event of a “yes” vote, until a new constitution was in place.

Spain's Constitutional Court has since 2014 declared any bid for an independence referendum to be unconstitutional, and on Thursday night it moved again to suspend the bills passed by Catalan lawmakers to organise the vote.

The court was set Friday to suspend the law outlining a possible transition, too.

But the separatists have ignored the actions of the judges — most of them named by the ruling conservatives — branding them illegitimate.

“It is worrying that the state is seeking to scare people and make threats, faced with a desire for a vote,” Lluis Corominas, vice president of the Catalan parliament, told national radio Friday.

Spanish Prime Minister Mariano Rajoy vowed Thursday to block the referendum, branding it an “intolerable act of disobedience”, and the Supreme Court warned senior Catalan officials to desist from promoting “any accord or action which permits the preparation and/or holding of a referendum”.

The warning went out to all members of the regional government, as well as mayors, the directors of regional public broadcasters, and Catalan police chief Josep Lluis Trapero, a popular figure after winning plaudits for his handling of last month's terror attacks in Barcelona and Cambrils.

The region's 948 mayors now find themselves in a delicate position.

The court on Friday ordered them to respect its suspension of the referendum bid, “warning them of their potential liabilities, which include criminal liabilities”, just a day after regional authorities asked them to provide lists of possible polling stations.

Neus Lloveras, mayor of the town of Vilanova outside Barcelona who heads an association of pro-independence municipalities, said “more than 600 town halls have already informed the regional government of the total availability” of their polling stations.

Others have said they will refuse to organise a banned referendum, such as Angel Ros, mayor of the town of Lerida.

“We would be leaving the legal framework,” he told TV3 television.

“Is it worth trying to build a state in order to divide the country? I'm among those who think not.”

On Thursday the national prosecutor announced that investigations into the planning of the referendum would be carried out with the help of the Civil Guard and Catalan police, and that voting material would be seized.

Corominas retorted that “there will not be enough paper to send all these summons and scare practically half of Catalan society”.

With its own language and customs, Catalonia accounts for about one-fifth of Spain's economic output, and already has significant powers over matters such as education and healthcare.

But Spain's economic worries, coupled with a perception that the region pays more in taxes than it receives in investments and transfers from Madrid, have helped push the independence question to centre stage.

The region remains divided, however. In a survey by the Catalan Centre of Opinion Studies in June, 41.1 percent backed independence while 49.9 rejected it.

Some 70 percent wanted a referendum, however, to settle the question once and for all.