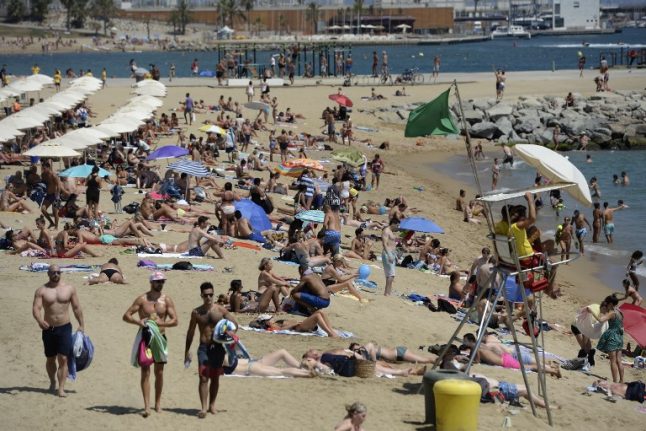 Tourists sunbathe on a beach in Barcelona on August 1, 2017. Photo: Josep Lago/AFP

10.510.531. It's an all-time record, taking the crown from August 2016, according to data released by national tourism statistics agency Frontur and Spain's office of national statistics INE on Thursday August 31st.

The previous record of 10.02 million was set in August 2016, traditionally the busiest month for tourism in Spain. This year's record-breaking July arrival figures represent an increase of more than 10 percent compared with July 2016.

Britons still represent the largest national constituent of visitors: more than 2.318.788 from Great Britain visited Spain in July 2017, an increase of 7 percent compared with the same period last year.  British tourists account for more than 22 percent of all visitors to Spain.

Tourists are also spending more than usual. The average tourist in Spain spent €1,132 in July 2017 , a more than 5 percent increase compared with the same month in 2016.

The report says the number of visitors from Ireland, Russia and Switzerland also increased substantially.

The sustained tourism numbers may not be welcome news for the people of Catalunya. A poll this year showed that residents in the province's capital Barcelona were more worried about the number of tourists than unemployment.

The city's mayor has also banned new hotels from opening in the city centre and issued heavy fines to online accommodation websites Airbbnb and Homeaway.

Protests have taken place in various tourism hubs across the country and anarchists have even slashed tires of a sightseeing bus and stolen rented bikes in Barcelona.  The anti-tourism protests follow a trend across Europe, from Venice to Berlin.

Yet Spain is on target to receive a record number of total visitors in 2017, having already registered an 11.3 percent increase compared to the first seven months of 2017. More than 46 million tourists have visited Spain so far this year.

In 2015 the total money spent by tourists in Spain amounted to €77 billion, a record.