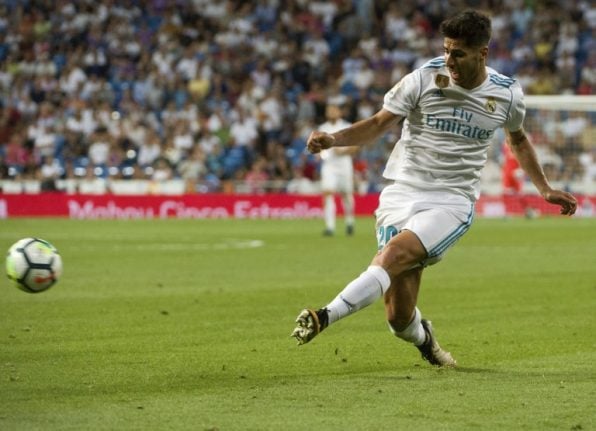 Yet, despite his tender age of 21, there is little evidence Real Madrid's rising star will be fazed by the burden placed upon him.

Asensio looks set to make his first competitive start for Spain after a stellar opening to the season in which he has scored four goals in five games for Madrid, including two memorable wonder strikes against Barcelona in the Spanish Super Cup.

And he has a habit of making a quick impression having scored on his La Liga, Champions League, Copa del Rey, Spanish and UEFA Super Cup debuts for Real over the past year.

“It is obvious, he has an innate talent, you can sense it,” said Real and Spain captain Sergio Ramos after Asensio put Barcelona to the sword.

“Hopefully he maintains that spark and eye for goal. Every time he plays he makes the difference.” Spain has called up 26 players for the upcoming qualifiers against Italy and Liechtenstein.

Many of the Italian squad, including legendary goalkeeper Gianluigi Buffon, already have bad memories of Asensio as he came off the bench to score as Real hammered Juventus 4-1 to retain the Champions League in June. Asensio has had to wait for his opportunity at full international level, so far winning just three caps and playing only 10 minutes of competitive action in an 8-0 rout of Liechtenstein.

However, his burgeoning reputation as one of world football's rising stars continued as he helped Spain reach the final of the Under-21 European Championships in June, including a hat-trick of stunning strikes from outside the area against Macedonia in Spain's opening game.

Asensio's form and the public clamour for his inclusion leaves Spain coach Julen Lopetegui little option but to include him for a decisive clash to decide which of the former world champions will qualify directly for next year's World Cup in Russia.

Both sides are tied on 16 points atop Group G of European qualifying with second place only good enough for a perilous two-legged playoff in November.

A 1-1 draw in Turin last October and a superior goal difference means a draw would leave Spain still in the driving seat with three more qualifiers to come.

Yet, the Azzurri have historically proved Spain's bogey side. A 4-0 rout in the final of Euro 2012 is La Roja's only win against Italy from open play in 11 competitive meetings.

Italy's 2-0 win over a sluggish Spain at Euro 2016 marked the end of an era as World Cup and Euro 2012 winning coach Vicente del Bosque resigned.

Lopetegui has been graced with a new talent generation to take forward, lead by Asensio but also containing the likes of Isco, Koke, Saul Niguez and David de Gea.

“If he continues with his progression he could mark an era at Real Madrid and Spanish football,” Valencia coach Marcelino Garcia Toral said of Asensio after he scored twice against his side last weekend.

The first step on that road will be helping to ensure Spain's place in Russia so his talent is seen on the world stage.

READ MORE: Eight football greats who have fallen foul of the Spanish taxman