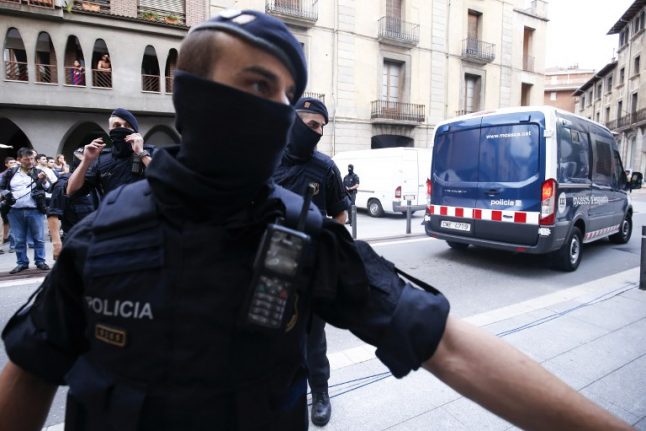 The regional police force in Barcelona was thrown into the spotlight with the attacks. Photo: AFP

Politicians and the police force in the Catalonia region have had to answer accusations that they froze out the national force for political reasons.

Both took place in the northeastern region of Catalonia, whose separatist government is deeply at odds with Madrid over its independence drive — in particular the plan to hold an October 1st referendum on the issue despite a ban issued by the government in Madrid.

Both sides in the immediate aftermath of the attacks, with Catalan president Carles Puigdemont and Spanish Prime Minister Mariano Rajoy appearing side by side. A week on however, the cracks are starting to show.

Spanish media reported that Catalonia's police force, which enjoys a high level of autonomy, did not consult Madrid over the history of Abdelbaki Es Satty, the imam thought to be the mastermind of the attacks.

They also alleged that Catalan police — tasked with leading the probe — had rejected any help into their investigation of an explosion at a house in Alcanar on Wednesday last week. The house turned out to have been the attackers' bomb factory. “There are some media that are only interested in discrediting” others, said Joaquim Forn, Catalonia's regional interior minister.

The row tarnishes an otherwise glowing image of Catalonia's police force, which has been praised for the speed and efficiency of its initial response and subsequent investigation.

Catalan police officers shot five of at least 10 members of the terror cell when they launched their vehicle attack in Cambrils.

Four days later, they located and killed Younes Abouyaaqoub, the driver of the van used in the Barcelona attack, not far from the city.

Another four suspects were detained meanwhile, and less than a week after the attack, police said the terror cell had been dismantled.

But on Tuesday, the AUGC union of the Guardia Civil police force and SUP union representing Spanish national police criticised the attitude of Catalan officials towards them.

They claimed that Catalonia's pro-independence executive had left them out of the investigation to “give the image abroad of a 'self-sufficient' Catalan state”.

Their explosives experts had not been allowed access to the house in Alcanar, some 200 kilometres (125 miles) south of Barcelona, they said in their joint statement.

And they also claimed that information they had on the links between Satty and one of the main suspects in a 2007 anti-terror operation had been ignored.

Madrid tried to defuse the row on Wednesday. Enric Millo, the central government's representative in Catalonia, said there had been “permanent, constant and fluid cooperation” between various security forces.

But that did little to ease the controversy.

Several dailies, including the conservative ABC, said Thursday that the judge assigned to the Alcanar explosion had told Catalonia's police that the 120 gas canisters found there had been meant for an attack, but they ignored her.

Police and judicial sources contacted by AFP could not confirm or deny the claims.

Other leading dailies said that the Belgian police had warned Catalan police of Satty in March 2016, when the Moroccan imam tried to find work in a mosque near Brussels.

Forn said this was untrue. There had only been an “informal” chat between a Belgian and Catalan agent who knew each other personally, said the Catalan minister

Police in Catalonia, whose official communication with foreign police has to go via Madrid, had never had any information on the imam, he insisted.

The Catalan police's own union also objected that its work was being unfairly politicised.

Spain's leading daily El Pais meanwhile criticised as “irresponsible” the mutual accusations and the attempts to politically exploits alleged successes or failures in the investigation.