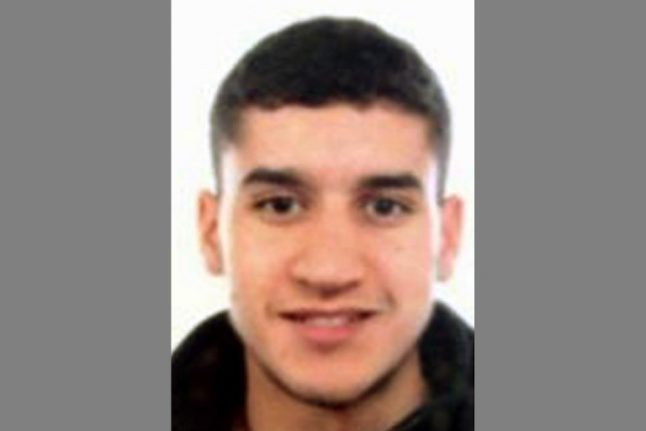 A police handout showing a photo of Younes Abouyaaqoub, the man they believe was the driver of the van. Photo: Los Mossos d'Esquadra

Spanish police said Monday that they have identified the driver of the van that mowed down pedestrians on the busy Las Ramblas boulevard in Barcelona, killing 13.

Police in Catalonia announced the identification on Twitter, without giving his name.

Identified the driver van of the Barcelona attack #Barcelona #Cambrils

The 22-year-old Moroccan remains at large, and police said Sunday that they did not know if he was still in Spain.

The van driver was pictured 'strolling' through the famous Boqueria market after fleeing the van following the attack in which he zig-zagged the speeding van through crowds on Las Ramblas, mowing down more than 100 people and killing 13.

El Pais published the images caught on CCTV on their website on Monday morning.

The 22-year-old Moroccan is believed to be the last remaining member of a 12-person cell still at large in Spain or abroad, with the others killed by police or detained over last week's twin attacks in Barcelona and the seaside resort of Cambrils.

He was described as “dangerous and possibly armed,” by police in Catalonia on Monday.

The regional police force, Los Mossos tweeted four pictures of Moroccan national Younes Abouyaaqoub wearing a striped top and with short, dark hair, and asked the public to “share as much (information) as possible.”

Click here for all the latest on Barcelona attack

Investigators have honed in on an imam, Abdelbaki Es Satty, aged in his 40s, who is among the suspects and is believed to have radicalised youths in Ripoll, a small town at the foot of the Pyrenees.

Several suspects — including Abouyaaqoub — grew up or lived there.

READ ALSO What we know about Barcelona attackers

Police said the imam had spent time in prison and had once been in contact with a suspect wanted on terrorism charges, without giving further details.

El Mundo newspaper reported that Satty had struck up a friendship in prison with Rachid Aglif, who is serving an 18-year sentence over the 2004 Madrid train bomb attacks, which killed 191 people.

Prosecutors in Belgium also said he had spent time in the country, without elaborating.

The imam has been missing since Tuesday.

On Saturday, police raided his apartment. They have raised the possibility that he died in an explosion on Wednesday evening at a house believed to be the suspects' bomb-making factory, where police uncovered a cache of 120 gas canisters.

The suspected jihadists had been preparing bombs for “one or more attacks in Barcelona”, regional police chief Josep Lluis Trapero told reporters, revealing that traces of triacetone triperoxide (TATP) — a homemade explosive that is a hallmark of the Islamic State (IS) group — had also been found. The suspects accidentally caused an explosion at the house on the eve of Thursday's attack in Barcelona — an error that likely forced them to modify their plans.

Instead, they used a vehicle to smash into crowds on Barcelona's Las Ramblas boulevard as it was thronged with tourists, killing 13 people and injuring about 100.

Several hours later, a similar attack in the seaside town of Cambrils left one woman dead. Police shot and killed the five attackers in Cambrils, some of whom were wearing fake explosive belts and carrying knives.

IS claimed responsibility for the attacks, believed to be its first in Spain.