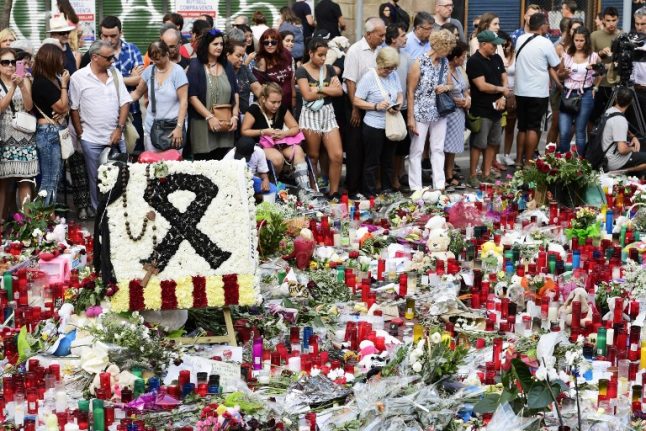 Flowers and candles have been laid on Las Ramblas as a memorial for the victims. Photo: AFP

The regional Catalan government is determined to push ahead with an independence referendum in the wealthy northeastern region on October 1st, which Madrid has vowed to stop.

Spaniards have dubbed the confrontation a “head-on train collision”.

The strain in ties has remained palpable in the aftermath of the twin vehicle attacks last week in Barcelona and Cambrils, a seaside resort further down the Catalan coast, that killed a total of 14 people and injured more than 100.

READ MORE: For all the latest on Barcelona attack Armed police during a mass held at the Sagrada Familia in Barcelona on Sunday. Photo: AFP

Spanish Prime Minister Mariano Rajoy  rushed to Barcelona on Thursday night after the first attack on the famous Las Ramblas boulevard to meet with his deputy and the government's representative in Catalonia.

Rajoy and the head of the regional government Carles Puigdemont made their first joint appearance after the attacks only on Friday afternoon after a brief telephone conversation the day before.

The prime minister, who is accused even by some within his own conservative Popular Party of fuelling separatist sentiment by refusing to satisfy Catalan demands for greater autonomy, called the meeting “very positive”.

He has repeatedly insisted on the need to “work together” and appealed for “unity in the fight against terrorism”.

King Felipe VI presided over a minute of silence along with Rajoy and Puigdemont in a Barcelona square near the Las Ramblas boulevard where a white van drove into crowds on Thursday.

This moment of contemplation was followed by applause and repeated cries of “I am not afraid” in Catalan.

But the next day when the king laid a wreath of flowers on Las Ramblas after visiting the injured in hospital, cries of “long live Catalonia” could be heard from the crowd.

The king remained po-faced, as he has in the past when jeered by Catalan nationalists at a football match at FC Barcelona's Camp Nou stadium.

Other old feuds have also resurfaced.     Spain's Interior Minister Juan Ignacio Zoido annoyed the Catalan government when he announced on Saturday that the cell that carried out the attacks had been “dismantled”.

Catalonia's interior minister Joaquim Forn corrected him, pointing out that Catalonia's regional police force was leading the investigation and that the suspected driver of the van who ploughed into crowds on Las Ramblas was still at large.

Forn then on Sunday announced that the cell had been “neutralised” even though the police said they don't know the whereabouts of the fugitive.

Like Spain's northern Basque Country, Catalonia, which is home to 7.5 million people who have their own distinct language and culture, has its own police force — the Mossos d'Esquadra — which jealously guards its autonomy.

Spanish media opposed to Catalan separatism have highlighted the fact that when Forn gave the toll of the attacks, he distinguished between Catalans and Spaniards as if they are different nationalities.

Newspapers have also pointed out that experts have long warned that Catalonia was a fertile ground for terrorism because of the high number of suspected jihadists who have been arrested in the region.

Some accuse Catalonia of having favoured immigration from North Africa over those from Latin America, who speak Spanish, to protect the Catalan language — a charge the Catalan government strongly rejects.

They say that while Arab speaking immigrants must learn Catalan to be able to communicate, those from Latin America can use Spanish which all Catalans understand.