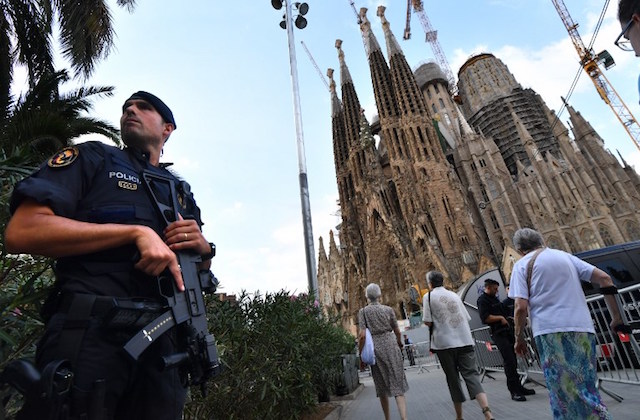 A police officer stands by the Sagrada Familia basilica in Barcelona on August 20th before a mass to commemorate victims of the terror attacks in Barcelona and Cambrils. Photo: Pascal Guyot/AFP
“We don't know where he is,” said regional police chief Josep Lluis Trapero, referring to 22-year-old suspect Younes Abouyaaqoub, as officials confirmed that the cell behind the carnage had been preparing “one or more” assaults in Barcelona.
READ ALSO: After terror attack, Barcelona under fire over security barrier
More than 120 gas canisters have been uncovered in a house where the suspects were believed to have been building bombs, Trapero said.
But the jihadists had accidentally detonated an explosive at the house on the eve of Thursday's attack in Barcelona, an error that likely forced them to modify their plans.
Instead, a vehicle was used to smash into crowds on Barcelona's Las Ramblas boulevard as it was thronged with tourists, killing 13 people and injuring about 100.
Several hours later, there was another attack in the seaside town of Cambrils in which one woman was killed.
Police shot and killed the five attackers in Cambrils, some of whom were wearing fake explosive belts and carrying knives.
Snipers on rooftops
In Barcelona, locals and tourists turned out in force on Sunday to mourn victims at the Sagrada Familia church designed by Gaudi, as snipers were posted on surrounding rooftops of the landmark building.
King Felipe, Prime Minister Mariano Rajoy and Catalonia's president Carles Puigdemont led the 90-minute ceremony, while heavily armed police stood guard outside.
Catalonia resident Teresa Rodriguez said she came to pray for the dead and the wounded who came from three dozen countries, some as far afield as Australia, China and Peru.
“What happened in Las Ramblas is really hard for us, we go for walks there often, it could have happened to me, my children or anyone. And here we are. It's huge, huge,” she said, fighting back tears.
Imam's role?
Later Sunday, nearly 100,000 people are expected at Barcelona's Camp Nou stadium for their team's first game of the season, to be marked by a minute of silence for the victims.
The Islamic State (IS) group claimed responsibility for the attacks, believed to be its first in Spain.
The terror cell was reportedly made up of at least 12 men, some of them teenagers. Police also confirmed that an imam, Abdelbaki Es Satty, was among the suspects.
Investigators are seeking to unravel the role of the imam, who is believed to have radicalised many of the youths in a small town called Ripoll at the foot of the Pyrenees.
READ ALSO: 'They're our neighbours': Hometown of Spain attack suspects in shock
Several of the suspects — including Abouyaaqoub — grew up or lived in the town of about 10,000 residents.
On Saturday, police raided the imam's apartment in Ripoll, his flatmate, who would only identify himself as Nourddem, told AFP.
Investigators were looking for DNA traces to check if he had been blown up in an explosion at the house in Alcanar, about 200 kilometres (120 miles) south of Barcelona, where the gas canisters were found.
Radicalising youngsters
The imam was reportedly known to police, with Spanish media saying he had spent time in prison.
El Pais and El Mundo quoting anti-terror forces said the imam had met prisoners linked to the Al-Qaeda-inspired bombing of Madrid trains that killed 191 people in March 2004 in what remains the worst terror attack in Europe.
Moha, 46, who lives in Ripoll, said the imam was initially part of the only mosque in town, but “later left and (set up) his own prayer hall in a garage”.
“There has been a change in the community since he arrived more than two years ago,” said Moha.
READ ALSO: Muslims fear anti-Islam backlash in tolerant Barcelona
He said the youths used to frequent a Moroccan cafe near the first mosque where they would watch football matches but had stopped doing so more than a year ago.
In the Moroccan town of M'rirt, relatives of Abouyaaqoub also accused the imam of radicalising the young man, as well as his brother Houssein.
“Over the last two years, Younes and Houssein began to radicalise under the influence of this imam,” their grandfather told AFP.
'Brainwashed'
Most of the suspects are children of Moroccan immigrants, including Ripoll-born Moussa Oukabir, 17, one of five suspects shot dead in Cambrils.
His older brother Driss is among the four arrested.
In Morocco, their father Said broke down on hearing the news.
“I hope they will say he's innocent… I don't want to lose my two sons,” he told AFP.
A cousin said Moussa “loved playing football, having a good time, chatting up girls”.
“The last few months, he started to become interested in religion. He used to go to a mosque in Ripoll. Maybe that's where he was brainwashed,” the cousin said.