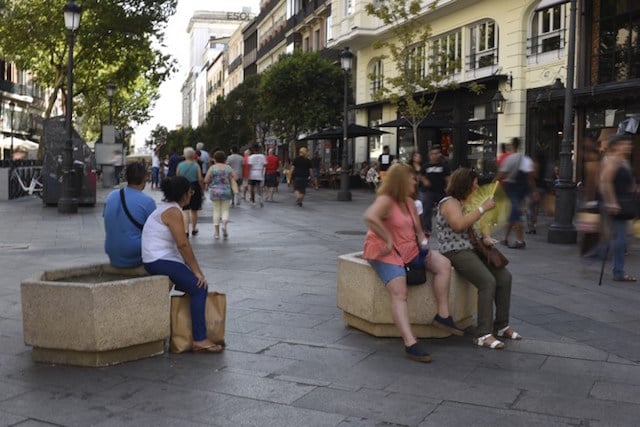 People sit on concrete barriers displayed at the entrance of a pedestrian street near Gran Via in Madrid on August 19th. Photo: Gabriel Bouys/AFP
An outcry has erupted on social media and in the press about the absence of bollards — short concrete posts designed to stop vehicles from driving onto sidewalks, with some people even demanding the mayor's resignation for ignoring police recommendations for such preventive barriers.
READ ALSO: Terrorist cell planned to attack Sagrada Familia with van of explosives
But Ada Colau, the mayor of Barcelona, Spain's most popular tourist destination, hit back, arguing that “it's not the right place to talk today about what could have been avoided by placing bollards at Las Ramblas.”
“The perpetrators of the attack wanted to kill and if they were unable to enter Las Ramblas, they would have done so elsewhere, and we can't put security barriers all over a city like Barcelona,” she said.
City officials also said that such decisions are adopted in conjunction with regional and state authorities.
Although Spain's interior ministry had recommended that cities erect security barriers at crowded places, the tripartite security council of state, regional and city authorities had decided against them for Las Ramblas.
“There's already a lot of structures — trees, benches, kiosks, street-lamps — and adding more would hinder the access of emergency vehicles,” a spokesman for local authorities told AFP.
READ ALSO: Barcelona: What we know about the attackers
Amid the fallout, Interior Minister Juan Ignacio Zoido underscored that while the police had made its recommendation for the security barriers, the decision of whether or not to apply it was up to each local authority.
With Spain's terror threat level at four out of a maximum five, Barcelona had ramped up security at concerts and festivities.
The government decided Saturday to hold the alert at four, but ordered additional measures, including beefing up security in highly frequented places.