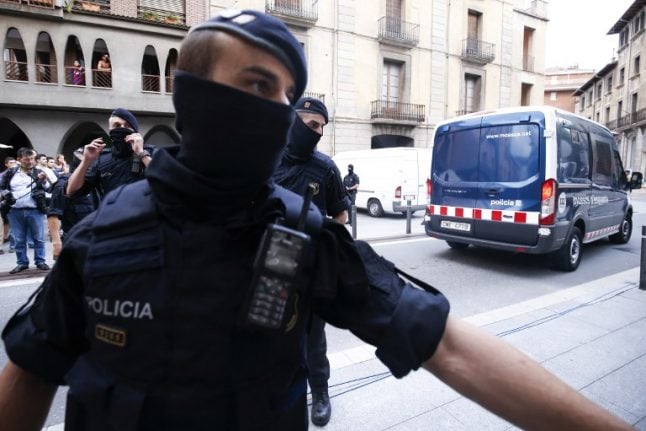 Spanish police expanded a manhunt Saturday for a Moroccan national believed to be one of the perpetrators of twin terror attacks in Barcelona and another seaside resort that killed 14 and wounded around 100.

With the country in shock after the carnage which saw two men deliberately ploughing vehicles into crowds of pedestrians, Madrid mulled raising the terror alert to the maximum in the world's third tourism destination.

With investigators working round the clock to identify the network behind the bloodshed, police said they were hunting for 22-year-old Younes Abouyaaqoub without confirming reports he was the driver who ploughed a van into pedestrians in Barcelona on Thursday.

Thirteen people died at the scene and scores more were injured in scenes of horror witnessed by terrified friends and relatives, with locals and tourists laying flowers, candles and teddies in their memory.

Investigators meanwhile were working furiously to unravel the terror cell of at least 12 young men — some of them teenagers — behind the Barcelona rampage and a second ramming attack with a car in the seaside town of Cambrils.

One woman was killed and six other people wounded, with police killing five “suspected terrorists” who were in the car and arresting four others.

The Barcelona attack was claimed by the Islamic State group.

Police have also identified another three suspects linked to the attacks, two of whom are thought to have died in a blast on Wednesday night as they tried to make explosives at a house in Alcanar, a town some 200 kilometres (140 miles) south of Barcelona.

As the hunt for Abouyaaqoub gathers pace, Spanish police tipped off their French counterparts about a white van linked to the attacks that may have crossed the border, a French police source told AFP.

Police in Catalonia said three of the suspects shot dead in Cambrils were Moroccan nationals, identifying them as Moussa Oukabir, 17, Said Aallaa, 18, and Mohamed Hychami, 24.

Moussa's brother Driss is one of the four arrested.

Back in Morocco, their father Said was in shock, with tears in his eyes when he was told of the news while at a wedding, surrounded by relatives.

“We're under shock, completely devastated,” he told AFP, saying Moussa had been studying “normally” at school while Driss worked “honestly.”

“I hope they will say he's innocent… I don't want to lose my two sons.” Police search the property where an explosion took place on Wednesday. Photo: AFP

Police said they believed the suspects were planning a much larger attack, possibly a vehicle bomb, with the use of gas canisters.

But they appear to have made mistakes, accidentally detonating Wednesday's explosion.

Security forces removed dozens of gas canisters from the house in Alcanar, according to an AFP photographer at the scene.

“They were preparing one or several attacks in Barcelona, and an explosion in Alcanar stopped this as they no longer had the material they needed to commit attacks of an even bigger scope,” said Josep Lluis Trapero of Catalonia's police.

Both attacks followed the same modus operandi with drivers deliberately targeting pedestrians in the latest in a series of such assaults in Europe.

In July 2016, 86 people were killed in the French resort of Nice when a man rammed a truck into a crowd. There have since been other deadly attacks using vehicles in Berlin, London and Paris.

Otso Iho of Jane's Terrorism and Insurgency Centre said the Spanish assaults appeared to have “a much higher level of coordination than has been typically present in previous attacks.”

It is believed to be the first time IS has claimed an attack in Spain.

Among the dead and injured were people from three dozen countries, including Algeria, Australia, China, France, Ireland, Peru and Venezuela, Spanish officials said.

The Catalan government said seven victims had been identified — five Spanish nationals, an Italian and a Portuguese.

Fifty-nine people are still in hospital, including 15 in critical condition, the Catalan interior ministry said

The Spanish government will decide on Saturday whether to raise the terror threat level from four to five — the maximum — at the height of the tourist season.

The tourism sector is crucial for Spain's recovering economy, accounting for 11 percent of GDP.

Until now, Spain has been spared the recent wave of extremist attacks that have hit France, Belgium and Germany.

It has even seen a surge in tourists as visitors shun other restive sunshine destinations such as Tunisia and Egypt.

But it is no stranger to jihadist attacks.

In March 2004, it was hit by what remains Europe's deadliest attack, when bombs on commuter trains in Madrid killed 191 people in an attack claimed by Al Qaeda-inspired extremists.

Spain has also had to deal with a decades-long campaign of violence waged by Basque separatist group ETA, which only declared a ceasefire in 2011.