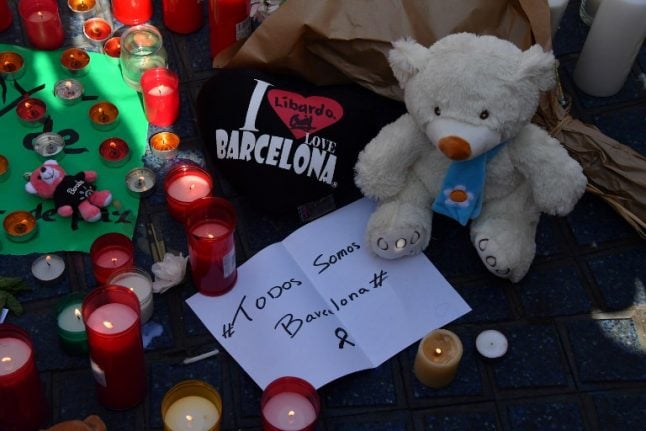 Tributes left at the scene in Las Ramblas. Photo: AFP

“Please like and share,” he writes above a photo of a smiling little boy wearing a green sweatshirt with the name of his nursery, whom he identifies as his grandson Julian Alessandro Cadman. “We have found Jom (my daughter in law) and she is (in a) serious but stable condition in hospital,” the post reads.

“Julian is 7 years old and was out with Jom when they were separated, due to the recent terrorist activity. Please share if you have family or friends in Barcelona.”

The post, shared more than 105,000 times, is just one of several examples of people desperately searching for loved ones or else grieving after twin attacks in the northeastern region of Catalonia that have left Spain in shock.

The attacks saw drivers ram their vehicles through throngs of pedestrians – first in Barcelona on the busy Las Ramblas boulevard and later in the nearby seaside town of Cambrils, killing 14 in total and injuring over 100.

The attack in Barcelona took place late Thursday afternoon in broad daylight, with witnesses recounting how a van pushed through the crowd, leaving bodies strewn along the avenue as other people fled for their lives.

In one particularly tragic incident, an Italian man died in front of his wife and two young children who narrowly escaped harm when the van sped through.

The death of Bruno Gulotta, 35, was announced by computer company Tom's Hardware, where he had worked in marketing and sales. “Our friend and colleague Bruno Gulotta was run over and killed by an odious terrorist in the heart of Barcelona,” a statement on the company website read.

Paying tribute to the kindness and generosity of their co-worker, Gulotta's colleagues said his violent death had left his wife Martina facing “trials no-one should have to bear”.

“We put ourselves in the shoes of little Alessandro, who is about to start elementary school knowing his and his family's life will never be the same again. And we think of baby Aria … who will never know her dad.”

Italian media reported that Gulotta had been holding five-year-old Alessandro's hand just before he was hit by the van. His wife had one-year-old Aria in a baby carrier and managed to pull her son out of the way too.

The family from Legnano, near Milan, were on holiday in Barcelona.

In another tragic story, a source from Barcelona's city hall, who refused to be named, said a Belgian family had also been torn apart.

“The father and two children saw their mother and wife die,” she said.

Some of the victims' relatives were staying at the Hotel Avenida Palace not far from Las Ramblas, helped along by psychologists, said its director Albert Alvarez.

At the cafeteria of the Mar Hospital in Barcelona, the family of one of the injured, a Spaniard, ate sandwiches, their eyes wet from crying, their faces tired.

“It's a really bad time,” one of the women in the group said, refusing to add anything more.