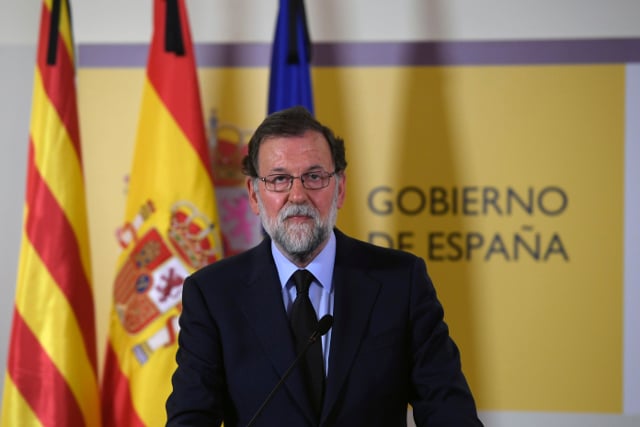 “Unfortunately Spaniards know very well the absurd and irrational pain caused by terrorism. We've suffered incidents like this in our recent history, but we also know you beat terrorists. You beat them with institutional unity, with police cooperation, with prevention, international support, and the firm determination to defend the values of our civilization: democracy, freedom, and the rights of people,” Spanish PM Mariano Rajoy said in a statement after arriving in Barcelona on Thursday evening.

“Democracy and its intrinsic values of liberty and equality are always stronger than terrorist violence. Catalonia has been, is, and will be a land of peace and welcoming, and we will not let a minority end our way of live that has lasted for centuries. Catalans have been, are and will be a peaceful and caring people”.

READ ALSO: The latest live updates on the Barcelona attack

The front page of El Pais led with the headline “Terrorist massacre on Barcelona's La Rambla”, and in their lead editorial the newspaper highlighted Barcelona's values.

“Terrorism consciously chooses its victims and this time it has chosen a city that represents more than any other the spirit of open space, democracy and pluralism which is exactly what radicalism wants to end.”

Catalan daily Ara took a firm stance on its front page with the headline “Without fear: Barcelona will not surrender to terror”.

“Now it's time to concern ourselves with the injured, take care of the families of the dead, recognize the solidarity of the citizens who went to give blood, support hospital staff attending the injured and the security services who reacted with speed and are investigating the people behind the attack and their connections, and highlight the information facilitated by citizens. In no instance will we resign ourselves to be the victims of terror and renounce our way of living,” their editorial noted.

Spain's King Felipe VI said Barcelona will continue to be an open city:

“They are assassins, simply criminals who will not terrorize us. All of Spain is Barcelona. Las Ramblas will once again be for everyone”.

ABC, one of Spain’s major national newspapers, said it was important to maintain faith in the police.

“Yesterday's attack proves it’s not possible to guarantee absolute security in a democratic society. The terrorists take advantage of the same freedoms and rights as their victims. We have to maintain our confidence in the police and the firm action of the law, because this threat will last a long time and increasingly ask for stronger legal, police and military measures,” their editorial insisted. A kiosk on La Rambla displaying black ribbons paying respect to the victims of the attack. Photo: Javier Soriano/AFP

The Mayor of Barcelona Ada Colau reiterated that Barcelona's values of openness will continue:

“Solidarity is useful, it makes us feel stronger. Barcelona is a city of peace and democracy. Brave and open to the world. Proud of its diversity and cosmopolitan. And it will continue to be. The cowards who have tried to sow terror will not achieve that”.

Thank you for the solidarity we have received from around the world. Barcelona is brave and united. Terror will never change that

And Catalan daily El Periodico pointed out that the attack, which has been claimed by Islamic State, did not distinguish in the faith of its victims:

“It could have been anyone. Barcelona residents or visitors. This violence is, apart from being cruel and irrational, absolutely blind. It's said that they are acting inspired by Islam, but they do not distinguish between the faithful and unfaithful in their victims. It's simply madness, nothing else to it, nothing more”.

READ ALSO: How the world reacted to the Barcelona attack