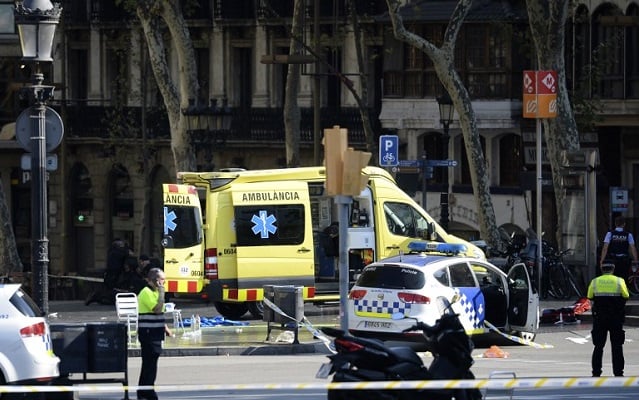 Credit: Josep Lago/AFP Police and medics in a cordoned off area following the incident.
23.36 House explosion connection
Police have said they think there could be a connection between an explosion at a property in Alcana and the terrorist attack in Barcelona. A building was completely destroyed in Alcanar, south of Barcelona in the Tarragona province, killing one person and injuring six during Wednesday night. Josep Lluís Trapero, the head of the Mossos said one of those arrested had links with the property and they were exploring whether the two events were connected.
22: 54 Mistaken identity
A man has come forward claiming that he is the real Driss Oukabir Soprano, and that his ID papers were stolen and he has wrongly been identified as a suspect in the Barcelona attack. The man, whose photograph was released to media as a suspect earlier in the evening, handed himself into police after seeing his image broadcast on television, according to a report in La Vanguardia.

22:48 Police have two suspects in custody

Police confirm that two suspects are under arrest and that the police operation is still continuing.

21:40 Police presence for the incident of #Barcelona is still working. We confirm two person under arrest

22:40 Official confirmation of the death toll of 13 people in the attack.

Authorities have confirmed that the death toll currently stands at 13 people. As for the injured, 15 have been described as serious, 23 less serious and 42 are being treated for light injuries.

22:20 Vehicle ploughs into police officers at a checkpoint

Spanish authorities said agents shot at a vehicle that forced its way through a police checkpoint in Barcelona knocking down two officers, but it was unclear whether there was any link to the deadly van rampage earlier in the city.

“In the process of closing the city of Barcelona, a vehicle forced its way through police controls and knocked down two officers,” said a spokeswoman for police in Catalonia where Barcelona is located.

“Their lives are not in danger,” she told AFP. “In the incident, shots were fired to try and stop the vehicle.”

Police said the vehicle was later stopped in Sant Just Desvern near Barcelona. It was unclear whether the driver was still in it.

“Soldiers” of the Islamic State group carried out a deadly van attack in Barcelona on Thursday, the jihadist organisation's propaganda outlet Amaq said, according to a US monitor.
“The executors of the Barcelona attack were soldiers of the Islamic State,” the Amaq outlet said, quoted by SITE Intelligence Group.
21:20  One suspect killed at police checkpoint
Reports that another of the suspects has been killed while trying to flee Barcelona. La Vanguardia reported that the man was killed in a spray of bullets after being stopped at a police checkpoint, although it was unclear whether he was shot by police or killed himself.

20:09 President Donald Trump sent a tweet in support of the people of Barcelona and Spain in the wake of the attack.

The United States condemns the terror attack in Barcelona, Spain, and will do whatever is necessary to help. Be tough & strong, we love you!

19.41 Barcelona hospitals are calling for blood donations to treat the injured. Authorities confirm there are 32 injured, of which ten are described as in a serious condition.

19.31 A second van has been stopped by police thought to be connected with the Las Ramblas attack. The van was stopped in a Burger King carpark in the city of Vic to the north of Barcelona.

19.25 RTVE is reporting that one man, named as Driss Oukabir, has been detained in connection with the attack. He is reportedly from Marseilles in France and has been living in the Catalan city of Girona. He is pictured below: 18:54 The latest reports suggest that at least ten people have been killed  (according to RTVE) while Catalan channel TV3 report 13 dead.

Among those reported injured are three children.

18.27 La Vanguardia report that a man, possibly the driver of the van, is holed up in a Turkish restaurant just off the Ramblas, which is now surrounded by police.

⚠⚠⚠⚠⚠⚠
IMPORTANT: incident in Plaça Catalunya #Barcelona. Please avoid going out in this area

Police warned those in the area to get off the streets and seek safety.

There has just been a massive trampling on the Ramblas in Barcelona by a person with a van. There are injured

Eyewitness accounts show that panic spread as the van ploughed into crowds near the Corte Ingles in Plaza Catalunya sending people fleeing.

The incident happened around 5pm.

Barcelona has shut down all metro and train stations in the vicinity and told all shops to close.

#Barcelona #Rambles If you are ok, please Inform your family using social networks to avoid the collapse of phone lines

The regional president of Catalonia, Carles Puigdemont tweeted “Maximum caution and all attention to the victims of the incident from Barcelona this afternoon. All police operatives deployed and coordinated”.

Vehicles have been used as weapons in terrorist attacks across various European cities over the past year.
The deadliest such attack took place in France in July 2016, when an extremist drove a truck into crowds celebrating the Bastille Day festival, killing 86. In December, a truck attack on a busy Christmas market in Berlin left 11 dead, and in April this year, an extremist drove a stolen truck down a pedestrianized shopping street in Stockholm, killing four people.
Cars have also been used to carry out terrorist attacks, including in London and Paris, the most recent such attack taking place early in August when a man rammed a car into anti-terror soldiers in the French capital, injuring six.