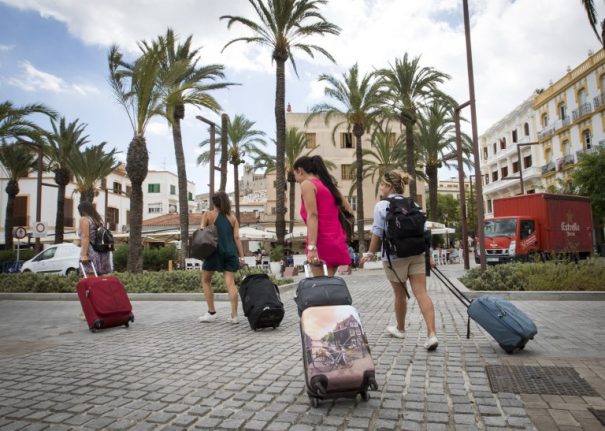 Known as much as a wild party island as a place of tranquility with coves of turquoise blue water, Ibiza has increased in popularity over the years.

But behind the sea, sun, dancing and yachts lurks a serious problem of tourism overcrowding that is preventing many locals from finding affordable accommodation.

READ MORE: Anarchists are targeting tourists in Spain's busiest resorts. This is why

“It's not easy living in a van but rental prices are crazy, you just can't pay them,” says Andrade, a 47-year-old Argentine who has lived in this part of the Balearic Islands since 2000, but was forced to move out of his home when he separated from his wife.

In his metallic blue van, he sleeps on a sofa-bed and makes meals on a small gas cooker. On the roof, solar panels provide him with electricity. Just under a decade ago, he says he could rent a country house for just €400 ($470) a month. Now for that price, he would be reduced to sharing a room.

The number of tourists visiting Ibiza, a small island of just 142,000 inhabitants, has almost doubled from 1.7 million in 2010 to three million in 2016, according to the regional statistics institute.

High demand for accommodation prompted the appearance of scores of tourist rentals, most of them without a permit, provoking a rise in real-estate prices and making it hard to find a room for less than €600.

The citizen's Platform of those Affected by Rental Prices in Ibiza has detailed the existence of countless abusive offers — €500 a month to live on a balcony, €300 for a mattress not including the bathroom, or
€2,100 for a small caravan.

Four caravans are parked next to his van in a wasteland, its occupants opting for a nomadic lifestyle due to high rental prices.

The situation gets even worse in high season, when the number of people on the island triples and temporary workers are needed in the tourism industry and other sectors, such as health services.

Such is the difficulty to find affordable housing that the Can Misses Hospital in Ibiza, the main one on the island, has rehabilitated an unused floor to provide accommodation for temporary workers. Javier Segura, a 30-year-old microbiologist, arrived in June for a three-month contract and was forced to stay there after an unsuccessful search for a flat.

In an ironic twist, the tourism sector itself is finding it hard to find much-needed temporary workers if it doesn't offer accommodation with the contract.

Years ago “in May, I would receive 10 to 12 CVs every day to come work in the summer, now just one or two come,” says Joan Riera, owner of the Can Alfredo rice restaurant in Ibiza Town, who has since opted to hire local personnel only.

“We have perverted the system,” deplores Lucas Prats, president of an organisation that promotes tourism.

Before there were “buildings dedicated to residential homes and those in tourism zones. Now everything is for tourism.”

As such, the regional parliament of the Balearic Islands has passed a law banning the use of apartments for tourists without a permit.

It also limits to just over 623,000 the number of visitors who can stay in hotels or legal rental accommodation in one go, and plans to reduce that figure to around 500,000.

“If we continue growing in this direction there will come a moment when we will not be a competitive destination. And neither will it be an area where one can live well,” says Vicent Torres, director of tourism for the local government in Ibiza.

“That's why we feel the need to reduce it all a little.” The aim is to stop locals from turning against tourism, an important activity for an island that was once poor and relied solely on fishing and agriculture before turning into an attraction for visitors in the 1960s.

“In Ibiza there are no exceptions, we all live off tourism,” says Prats.

READ ALSO: Anarchists are targeting tourists in Spain's busiest resorts. This is why