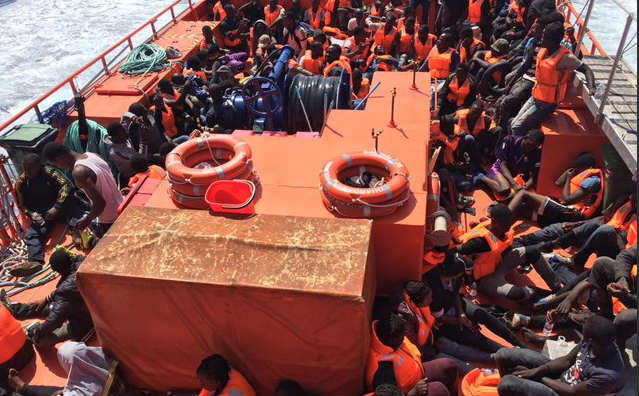 Migrants crowded onto a rescue boat in the Strait. Photo: Salvamento Maritimo

A coastguard spokesman said 599 people had been rescued since the early hours of Wednesday morning, a large number for just one day in Spain.

At least 35 minors, including a baby, were among the flow of migrants crossing the Strait of Gibraltar and the Alboran Sea as they fled unrest or poverty in their countries, he said.

“The high number of boats coming to the Spanish coast this summer is unusual,” a spokeswoman for Spain's coastguards said earlier, adding that there were three times as many as in the same period last year.

According to the International Organization for Migration (IOM), 8,385 migrants had arrived in Spain this year by August 9th.

At least 121 drowned while attempting this route, compared with 128 deaths for the whole of 2016, as recorded by the IOM.

The number still pales in comparison with the number of people hitting the shores of Italy, which saw close to 97,300 people arrive this year until August 13th, with 2,242 deaths.

In June, about 5,000 people were rescued in just one day in the Mediterranean Sea off Libya, Italian coastguards said.

But Spain could overtake Greece this year in the number of migrants arriving by sea, the IOM said this month.

And this does not take into account those crossing by land into Ceuta and Melilla, two Spanish territories in northern Morocco.

Both cities are the EU's only land borders with Africa.

As a result, they are entry points for migrants who regularly try to climb high double border fences or force their way through them with wire cutters, or hide in vehicles crossing the frontier.