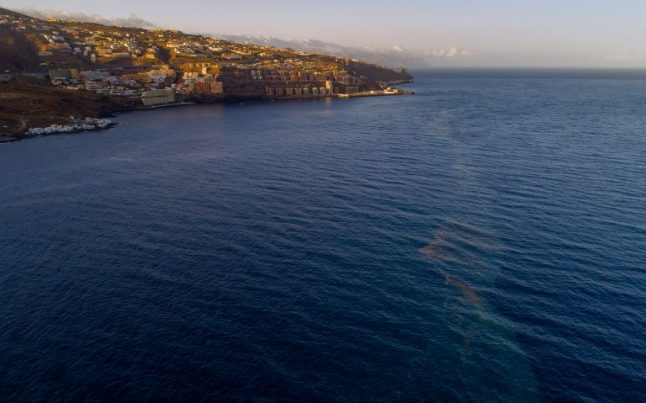 Drone footage shows a spot on the sea surface caused by micro-algae near Tabaiba beach, off the coast of El Rosario in Tenerife. Photo: AFP

The spreading algae, which contain a toxin that can irritate the skin, have produced a greenish brown hue in the waters off some beaches of the hugely popular archipelago near the coast of Africa that attracts millions of visitors every year.

But Jose Juan Aleman, director of public health for the archipelago, told AFP that no beach had “been closed in the Canaries due to the presence of microalgae”.

“When microalgae are detected in a bathing zone, swimmers are recommended not to touch them,” he said.

On Tuesday a red flag flew on part of Tenerife's Las Teresitas beach — meaning swimming was not allowed.

A yellow flag — urging precaution — flew on the other section of the beach.

“This morning, we detected a lot of microalgae on the beach and we decided to put up the red flag,” a Red Cross lifeguard, who refused to be named, told AFP.

But despite the ban, holidaymakers were still seen swimming.

“We've been giving information all day and blowing the whistle, we get them out of the water and then they just come back,” he said.

Others played football on the beach, where traces of the algae and foam could be seen.

The algae are a type of bacteria, trichodesmium erythraeum, also known as sea sawdust, Aleman told AFP on Monday. Stains on the sea surface caused by micro-algae off the beach of El Varadero, on August 5, 2017 on the Spanish Canary island of Tenerife.Photo: AFP

“Its proliferation is a natural, temporary phenomenon which is going to disappear” in due course, he added, suggesting global warming was helping the algae spread.

The bacterium “contains a toxin which can lead to skin irritation, dermatitis, hence one must avoid coming into contact with it in the water and on the sand.”

Those include “an increase in water temperature” as well as a “dust cloud sweeping in off the Sahara which is rich in iron, a nutrient which micro-organisms like”.