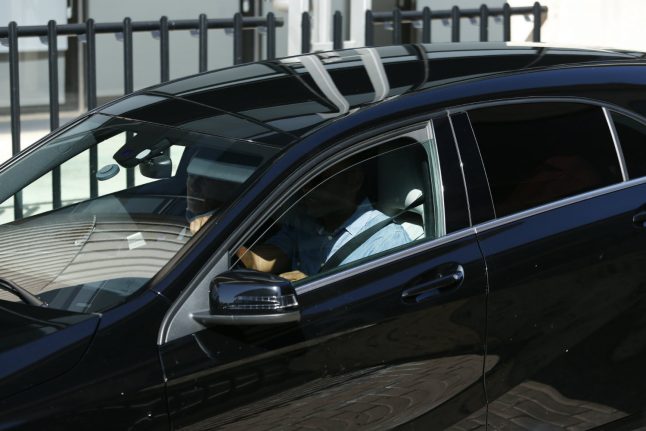 Cristiano Ronaldo arrives in a vehicle with tinted windows to appear at the court in Madrid. Photo: AFP

The Real Madrid star was called to testify in court on Monday over accusations he evaded 14.7 million euros in tax on his image rights via a complicated web of shell companies based in the British Virgin Islands and Ireland.

However, Ronaldo has insisted he did not create a “special structure” to manage his image rights when he moved to Real in 2009 but simply maintained the one set up in 2004 while he was at Manchester United.

That structure had been recommended to the Portuguese captain by United via their specialist sports lawyer Chris Farnell.

“Chris told me it was what all the footballers did and I didn't want to be an exception,” Ronaldo added in court.

“On the field I always want to be an exception, but off it I want to be like everyone else.”

If Ronaldo is found guilty he faces a fine of at least 28 million euros and potentially a three-and-a half year jail term, according to the Gestha union of experts at Spain's Inland Revenue.

However, despite being just the latest in a series of high-profile players to be investigated over their image rights in recent years, Ronaldo believes he is being targeted due to his fame.

“If I wasn't called Cristiano Ronaldo I wouldn't be here,” Ronaldo also reportedly told the court according to Spanish media.

The four-time World Player of the Year posted on social media site Instagram on Tuesday: “What bothers people is my brilliance, insects only attack lamps that shine!!!!”

Ronaldo will return to training with his Madrid teammates later on Saturday for the first time since lifting the Champions League final in June.

Madrid coach Zinedine Zidane had given Ronaldo an extended break due to his participation in the Confederations Cup with Portugal and his court appearance.

READ ALSO: Eight football greats who have fallen foul of the Spanish taxman