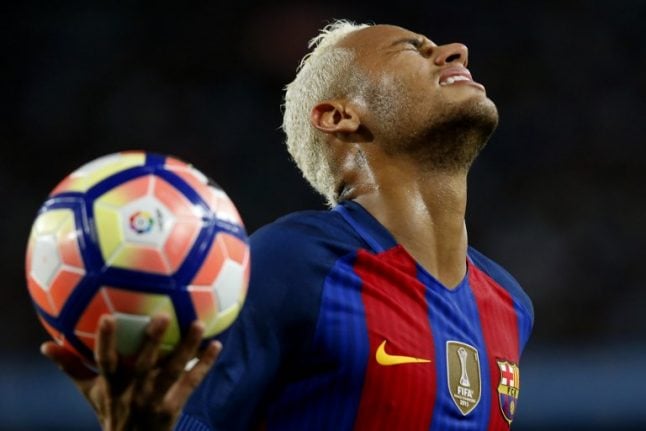 Representatives of the 25-year-old Brazilian were turned away from the Madrid headquarters of La Liga after their payment to meet Barcelona's buyout clause was refused by officials who have accused the French club of breaching transfer rules.

“We can confirm that the legal representatives of the player attended La Liga to pay the clause and this has been rejected,” a spokesperson told AFP.

The move may delay Neymar's transfer but is unlikely to derail it, according to experts.

However, the player, initially expected in Paris later Thursday, is now due to arrive a day later, according to airport sources in the French capital.

The transfer dominated front pages across the world with many commentators aghast at the rampant inflation in football transfer fees with Neymar's new mark more than doubling the previous record set by Manchester United's capture of Paul Pogba last year.

However, in the French capital there is huge excitement at PSG's Qatari-backed project landing a star name to finally make them feared among European football's elite.

“Neymar to PSG – the transfer of the century”, splashed Le Parisien's front page with the first five pages devoted to his impending arrival.

“Neymar could be wearing the parisian shirt from this week,” added Le Parisien with a possible presentation to take place at PSG's Ligue 1 opener at home to Amiens on Saturday.

The mood was understandably more somber in Spain.

Madrid-based sports daily AS ran with “pay and go” alongside a smiling Neymar, whilst Marca described the move as “the signing that changes the history of football.

Buenos días! “Pay up and off you go” is the gist this morning after Neymar announced intention to leave Barça.https://t.co/j4MdtMgEEE pic.twitter.com/E0DVtlituX

In Barcelona, attention turned to who the Catalans can sign to replace Neymar in the month before the transfer window closes with Liverpool's Philippe Coutinho and Borussia Dortmund's Ousmane Dembele both linked.

There was also scepticism at the role played by PSG's owners Oryx Qatar Sports Investments (QSI) at a time of political crisis for the oil rich state emirate which has been boycotted by its Gulf neighbours in recent months and will play host to the World Cup in 2022.

Whilst coaches, including Manchester United manager Jose Mourinho, have lamented that the move could cause even greater inflation in transfer fees and player wages, France's Budget Minister claimed to be “delighted” Neymar will earn a reported €30 million after tax.

“If in fact Neymar does come to a French club, the budget minister will be delighted at the tax that he will be able to pay in France,” Darmanin told France Inter radio.

PSG's finances will come under heavy scrutiny in the years to come with both La Liga and Barcelona threatening to report the French giants to European football's governing body for breaches of financial fair play regulations (FFP).

Clubs can be sanctioned by UEFA for making a loss of more than €30 million over a three-year period.

According to reports Neymar underwent a medical in Porto on Wednesday after saying his goodbyes to his Barcelona teammates before returning to the Catalan capital late on Wednesday night.

Once the hype over the astronomical figures involved subsides, Neymar must deliver on the pitch to make PSG's dreams of lifting the Champions League for the first time and his own ambition of winning the Ballon d'Or come true.

By leaving Barca, Neymar is stepping out from under the shadow of five-time World Player of the Year Lionel Messi to try and prove himself as the world's best.

“It was a huge pleasure having shared all those years with you, my friend @neymarjr,” Messi posted on Instagram alongside a montage displaying some of the pair's finest moments together on Wednesday.

“I wish you lots of luck in this new stage in your life. See you soon tkm,” he added. “Tkm” stands for “te quiero mucho” (I love you loads).

“Thanks brother. I will miss you man,” Neymar replied.