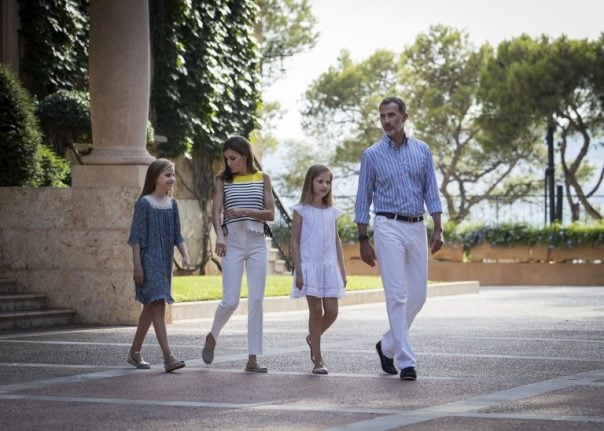 But before the private family time, King Felipe VI invited photographers to the Marivent palace for the annual summer holiday press call. Looking happy and relaxed, the King and Queen strolled the grounds accompanied by their daughters, Crown Princess Leonor, 11 and Princess Sofia, 10. The family paused to greet journalists outside the palace.

The King, who was crowned in June 2014 when his father King Juan Carlos abdicated, has continued the family tradition of spending holidays in Mallorca. The Marivent Palace grounds make up 33,000 square metres located on the shores of the island's capital Palma. The royal family has been spending the summer and Easter holidays at the palace for more than 40 years. King Felipe kicked off his island jaunt competing in the 36th Copa del Rey (King’s Cup) Regatta off the coast of Palma de Mallorca where he was pictured with the crew of the Aifos sailboat.

Apart from the occasional official engagement while on the island, for the most part the royal family will enjoy private time when they will likely be joined by other members of the royal family including King Juan Carlos and Queen Sofia.

READ MORE: Mallorca voted one of world's best holiday destinations and here's why

In pics: Spanish royals on parade in state visit to London