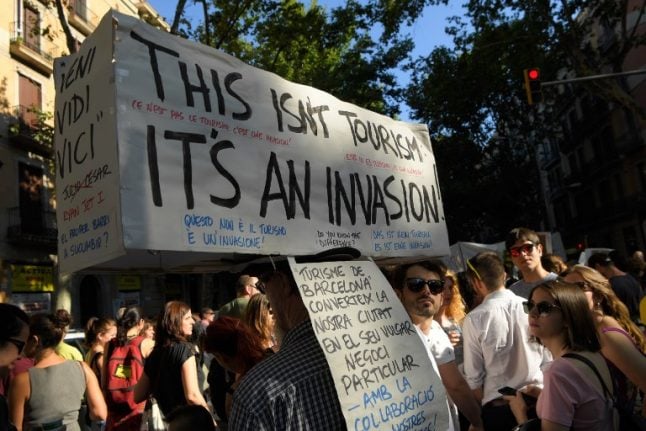 Then they vandalised bicycles hired to the hordes of holidaymakers who throng the streets of the Catalan capital.

Now they are targeting superyachts and diners in upmarket restaurants in the marina of Palma de Mallorca.

The message is the same: “Tourists go home”.

Who is carrying out the attacks?

The perpetrators purport to belong to a group known as Arran – the youth wing of the radical CUP party, which is the junior partner in the pro-independence coalition running Catalonia.

The group, which has about 500 members whose average age is 25, insists that carrying out acts of violence has become the only way to stop the “tourist invasion” in which only the wealthy benefit.

Laura Flores, a spokesperson for Arran, insists the vandalism was justified as “a response to the violence we face every day. The street must be allowed to speak; it’s the only place where we can fight.”

Barcelona has long been a flashpoint in the battle of locals against tourists as the Catalan capital grows ever more popular with visitors. Since staging the Olympics in 1992, it has fast become the most visited city in Europe, after Paris and London.

Although the tourist industry has been a boon for Spain’s economy – a record 75 million visitors came to Spain last year and tourism amounts to 11 percent of the nation’s economic output – locals complain that tourism is fast ruining city neighbourhoods.

As apartments are given over to tourist rentals, prices rise, and old neighbourhood favourites become thronged with selfie-taking gawkers.

This astronomic growth in visitor numbers has generated  “tourismophobia” that isn’t just limited to Barcelona. A backlash has also been seen in Mallorca and Madrid where anti-tourist graffiti is a common site.

What are authorities doing about it?

Barcelona’s city hall, led by radical left-wing mayor Ada Colau, has been leading the fight back against mass tourism, bringing in a moratorium on new hotel licences and a crackdown on Airbnb-style tourism lettings.

READ ALSO: Tourism is a bigger worry in Barcelona than unemployment, poll shows

In Mallorca, authorities threaten to ban private tourist lettings in the centre of Palma and limit the number of hire cars on the island.

In response to the recent actions by Arran, city authorities condemned it as “damaging to the image of the Barcelona and Catalonia”.

However there was little condemnation from CUP – the political party they are affiliated with.

The recent spate of anti-tourist attacks is unlikely to be the last we hear of the group as the busy summer season gets into full swing.

“Our politics is doing actions like attacking the bus, or the bicycles or this restaurant,” a source inside the group behind the recent attacks told Spanish online newspaper El Confidencial.

“We are very satisfied with the repercussions this has created, and this means we will carry out more actions like this.”