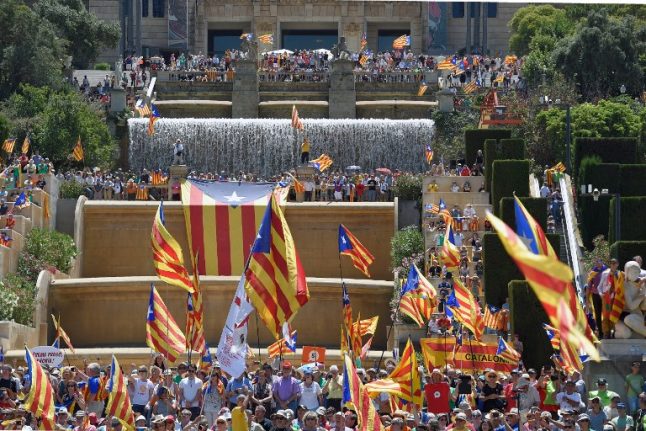 Esteladas flying at a pro-independence rally in Barcelona in June Photo: AFP

The vote came as the stand-off between the Spanish region's pro-independence government and Madrid reached such heights that opposition MPs have dubbed it unprecedented and an attack on democratic rights.

The reform, passed with 72 votes for and 63 against, means that any piece of legislation in Catalonia can now be adopted quickly, with fewer checks and balances.

This in turn should ease the planned passage of a controversial bill that aims to extract the wealthy, northeastern region from Spain's legal system.

The idea is to circumvent any legal and practical challenges from Madrid to organising the referendum.

But Wednesday's adoption of the fast-track reform has drawn sharp criticism from opposition deputies. Catalonia's Socialists accused those who voted for it of “trampling on the democratic rights of the lawmakers and citizens they represent”.

And Carlos Carrizosa of the centre-right party Ciudadanos — the main opposition grouping in the Catalan parliament — told AFP the situation was “unprecedented in our democracy”.

The move is only the latest in a long list of defiant announcements, threats and legal challenges from both Madrid and the Catalan executives over its independence drive.

The central government categorically rejects a referendum it says threatens Spain's unity, and which the Constitutional Court has deemed illegal.

But this has fallen on deaf ears among Catalan leaders, who pledge to hold the binding vote on October 1 come what may — though how they will do so remains unclear.

Joaquim Forn, Catalonia's new minister in charge of interior affairs and a staunch separatist, said last week that the region's police squad would not stand in the way of people voting, even if the referendum is illegal.

Then in an interview with French daily Le Figaro on Monday, Catalonia's President Carles Puigdemont said that nothing would stop the region from voting.

“No suspension, no threat will stop the Catalans from deciding their future in a democratic way,” he said, referring to speculation that Madrid could remove him from office for disobedience.