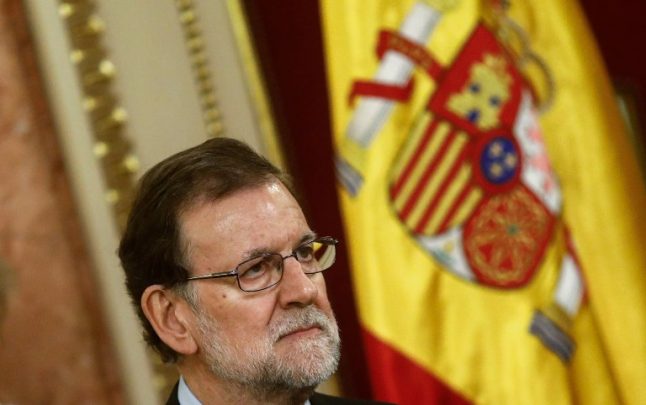 Mariano Rajoy will be the first serving Prime Minister to take the stand since Spain's transition to democracy. Photo: AFP

Spain's Prime Minister Mariano Rajoy is gearing up to testify as a witness Wednesday in a major graft trial involving former members of his conservative Popular Party, a first in the country.

No other acting prime minister has appeared in court since Spain's transition to democracy following dictator Francisco Franco's death in 1975.

Two former premiers — Felipe Gonzalez, an ex-Socialist leader, and Adolfo Suarez, prime minister during the transition — appeared in court in separate trials after they were no longer in office.

In power since 2011, Rajoy will take the stand as his party's reputation suffers from a series of corruption scandals that have exasperated Spaniards and contributed to the PP losing its absolute parliamentary majority in 2015 elections.

The 62-year-old conservative leader had asked to testify by video-conference but Spain's High Court ruled he must appear in person.

The trial at a court in San Fernando de Henares, near Madrid, centres on a vast kickbacks scheme that allegedly saw companies shower former PP lawmakers and civil servants with bribes in exchange for contracts.

While he is not accused of anything, Rajoy's post as party chief since 2004 – and a high-ranking member before that – means he could provide valuable testimony.

A spokesman for the court said that as prime minister, Rajoy would have the “privilege”, if he so desires, of not sitting in the traditional witness stand in front of the judges but on the elevated platform where they preside.

But he will not be able to avoid the shouts of protesters who have planned to gather in front of the courthouse on Wednesday morning, nor questions on corruption issues.

“The impact in the media on that day and the next days could be brutal,” conservative daily ABC said at the weekend in an editorial.

Not a 'good image'

Public prosecutors are not to expected to be questioning Rajoy as they came out against his appearance, judging it unnecessary.

But their recommendation was overruled by judges who decided the prime minister should testify.

So on Wednesday the ADADE lawyers' association, a civil plaintiff in the case, will question Rajoy on his knowledge as a long-time high-ranking PP member.

Companies would allegedly give him a commission of two to three percent on the value of public contracts.

His main accomplice was allegedly Luis Barcenas, a former PP treasurer who was once close to Rajoy.

But how much did Rajoy himself know about the alleged bribery of PP politicians?

And why did he not report Correa, a member of his party, if he had such doubts about him that he kicked him out of the PP?

A spokesman for Rajoy's office told AFP the prime minister was “calm and ready to cooperate”.

And Fernando Martinez-Maillo of the PP insisted the prime minister's court appearance was the sign of a functioning democracy.

He pointed out that David Cameron, when he was still British prime minister, was questioned as part of a public inquiry into press ethics in 2012, and France's Dominique de Villepin also appeared in court in 2006 when premier.

But Jose Luis Abalos, a Spanish Socialist party leader, retorted it did not “give Spain a good image”.