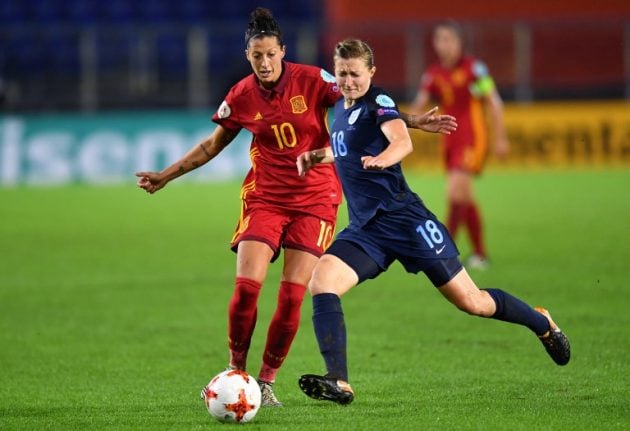 Earlier in the day, Carolina Mendes and substitute Ana Leite gave Portugal a 2-1 win over Scotland in a clash of Euro newcomers in Rotterdam.

England are all but into the quarter-finals and sit at the Group D summit, having thrashed Scotland 6-0 in their opener.

The second knock-out round spot is likely to go to Spain or Portugal, with the former the favourites as they take on bottom team Scotland in their final group game on Thursday.

The Scots appear destined for an early exit, and will have to beat Spain by two goals to have any chance of progressing.

Chelsea striker Kirby picked up a pass from Ellie White in the second minute and stormed into the box, beating Spain keeper Sandra Panos with a low shot to score her seventh international goal.

Taylor scored her fourth goal in two games five minutes from the end, after a pass from Jordan Nobbs found her inside the box.

“If you look at the overall picture, it's a fantastic performance and a really good result,” said England coach Mark Sampson.

“Bloody damn happy. The spirit, the resilience, the grit… It was all there tonight.”

It came to an end with a torrential downpour that dampened the pitch and slowed things down considerably with Spain on the front foot.

The second half was very much in the same vein as the rain returned — Spain dominated the game, pushing for an equaliser, but they never really came close as the soaked pitch hampered their play.

“We are going to continue this way, I am confident about my team.”

In Rotterdam, Mendes scored against the run of play on 27 minutes after a cross from Diana Silva which Scotland defender Vaila Barsley comically failed to clear.

Scottish substitute Erin Cuthbert put Scotland level in the 68th minute with a clinical finish after being put through by Caroline Weir.

But Scotland's joy was short-lived as four minutes later, Leite sprinted down the middle and beat goalkeeper Gemma Fay with a low strike.

“We are enjoying this moment – it is our first time,” said Portugal coach Francisco Neto, whose side will need to better Spain's result against Scotland when they face England on Thursday to reach the last eight.

“We will try our best, but we know England are in the top three of European teams in the rankings. But Portugal will fight with everything we have, for sure.”

Portugal scored from their single shot in the first half, despite Scotland being more threatening up front, with Lana Clelland first firing wide and then seeing her shot tipped onto the post by keeper Patricia Morais.

Scotland found themselves under pressure early in the second half, with Carole Costa and Tatiana Pinto firing wide, just like Weir and Leanne Crichton at the other end.

Mendes then sent her left-footed effort just past the post and Leite fired over, while Weir hit the upright five minutes from the end as Scotland desperately tried to salvage their campaign.

“We should have been up 2-0 in the first half, but we could not put the ball in the net unfortunately, and then a counter and the ball takes that bounce off the defender and that was an unfortunate goal which put us on the back foot,” she said.