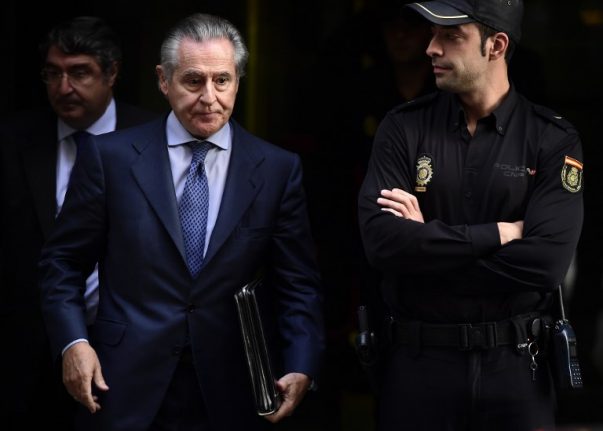 Blesa, who was at liberty pending appeal after being found guilty in the “tarjetas black” banking scandal and sentenced to six years in jail, was discovered with a bullet wound from a hunting rifle.

He had been on a hunting trip with friends and after breakfast said he was going to move his car, when the shot was heard, according to reports in El Pais.

Blesa, along with former IMF-chief Rodrigo Rato, was one of 64 former executives and board members at bothCaja Madrid and Bankia, accused of misusing €12 million ($12.7 million) between 2003 and 2012. Rato (L) and Blesa in court in February. Both were found guilty and sentenced to jail but were at liberty pending appeal after paying a bond. Photo: AFP

They were accused of having paid for personal expenses with credit cardsput at their disposal by both Caja Madrid and Bankia, without ever justifying them or declaring them to tax authorities.

These expenses included petrol for their cars, supermarket shopping, priceyholidays, luxury bags or parties in nightclubs.

The court heard that Miguel Blesa had established the “corrupt system” while head of the bank before handing over the reins to Rato in 2010.

Caja Madrid was once Spain’s fourth-largest lender, with more than seven million customers and annual earnings of over €2 billion during the real estate boom.

In 2011, it fused to form Bankia, when thousands of small-scale investors were
persuaded to convert their savings to shares ahead of the flotation of Bankia, later losing it all.

Within a yearthe state injected billions of euros but faced with the scale of Bankia's losses and trouble in other banks, it asked the European Union for a bailout for the entire banking sector and eventually received €41 billion.