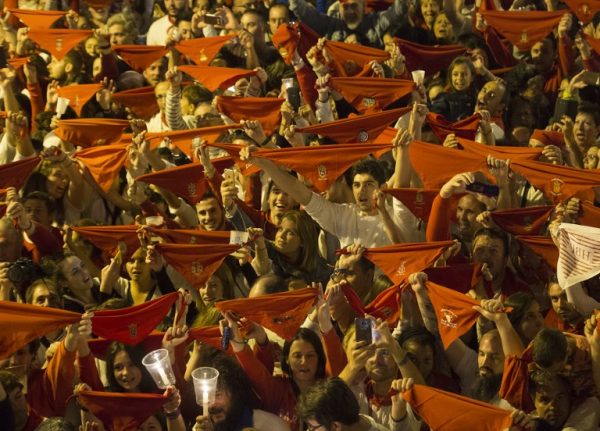 Revellers raise red scarves and candles as they sing the song 'Pobre de Mi', marking the end of the San Fermin festival in Pamplona, northern Spain on Saturday. Photo: ANDER GILLENEA / AFP
The annual San Fermin event, which sees hundreds of thousands of revellers pack into the city and engage in round-the-clock revelry, has been plagued by cases of sexual assault in recent years.
Pamplona city hall said police had received 14 complaints relating to sexual assault and molestation during the nine-day celebration.
Pamplona has stepped up its campaign against sexual assault at the festival after a 18-year-old woman was alleged to have been raped last year by five men from Seville, who also recorded the attack.
Municipal officials this year plastered the city with signs showing an open hand with the slogan: “Pamplona free of sexual aggressions”.
The festival, immortalised in Ernest Hemingway's 1926 novel “The Sun Also Rises”, dates back to medieval times and features religious processions, folk dancing, concerts and round-the-clock drinking.
But the highlight is a bracing daily test of courage against a thundering pack of half-tonne fighting bulls through the city's cobbled streets.
Police said a total of 64 people were injured by bulls at this year's event — around a quarter fewer than in 2016. Twelve were hospitalised.
Despite the obvious danger, only 15 people have been killed during the bull runs since 1911, with the last fatality coming in 2009.
Anyone aged 18 or above can take part, though authorities warn it is at their risk.