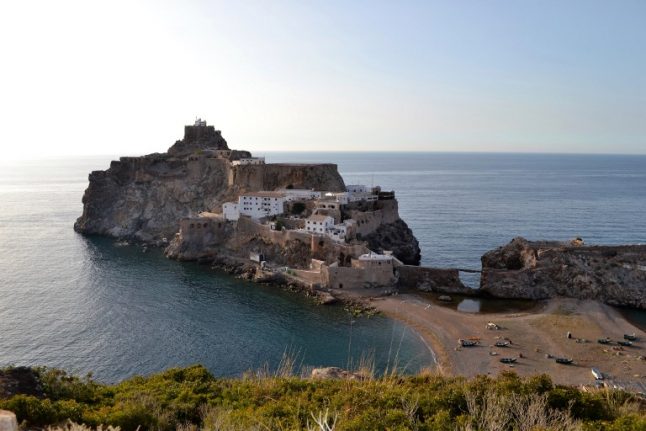 Penon de Velez de la Gomera, a peninsula within Spanish territory, off the coast of Morocco's Al-Hoceima national park, is home to one of the shortest land borders in the world. Photo: Mustafa El Hass
Wooden boats lie amid nets worn by seawater at the foot of the imposing mini-peninsula, home to a Spanish military base.
“Don't approach the string!” a Moroccan soldier shouted from a pillbox, his helmet askew.
“They might shoot you with plastic bullets,” he said in a lower tone of voice, before retreating to the shade of his wooden shelter on a slope facing the Mediterranean.
Penon de Velez de la Gomera is one of seven Spanish enclaves on the northern coast of Morocco, which claims sovereignty over all of them.
The best known are Ceuta, which overlooks the strategically vital Strait of Gibraltar, and Melilla, further to the east. But a string of islets remain under Spanish control, including several occupied by Spanish forces. These tiny leftovers of Spain's once vast empire have been a source of tension between Morocco and its former colonial occupier.
One of them, Perejil — known to Moroccans as Leila — was at the heart of an angry spat between the two countries 15 years ago this week.
A handful of Moroccan soldiers briefly took over the outcrop just 200 metres off the coast in 2002. The incident ended with a bloodless intervention by Spanish commandos.
But today, the topic of Madrid's enclaves receives little attention. Local press reports say “things have changed”, and the two are now close partners.
“Here we don't have any real problem with the Spaniards, even though it's as if our village is occupied,” said Hamed Aharouch, 27. Photo: Mustafa El Hassouni/AFP
End of the world
Aharouch sat on a plastic chair outside his fisherman's hut in the hamlet of Bades, a stone's throw from the Spanish base.
Perched at the end of a dusty track criss-crossing the mountains of Al-Hoceima national park, Bades seems to lie at the end of the world.
The Spanish peninsula, 87 metres at its highest point, dominates the bay, an enchanting cove of blue waters hemmed in by rocky slopes. Spain's gold and red flag flies above the fortress which its forces have held since the 16th century. Military helicopters fly in to a landing pad part way down the slope, and below it, a guard peered from an observation post.
Once separated from the mainland by a narrow strip of water, Penon is now linked by an isthmus of grey sand.
“It seems the Spaniards want to put up a fence in place of the string,” said Aharouch. “We don't agree to that — it would be oppression. Already we can't approach.”
“In any case there's nothing we can say,” he added, smoking his pipe. “The (Moroccan) state prevents us from doing anything. Even our own soldiers shout at us if we get too close to the string.”
Almost no contact
In August 2012, a group of Moroccan activists climbed onto the rock, and were chased away by Spanish soldiers. The incident went no further.
But since the Perejil crisis, residents say they have had almost no contact with Spanish forces.
It is a long time since the occupiers of the Penon played football with the village children or bought fish from the fishermen.
“The Spaniards threaten us with their weapons,” grumbled Ali El-Guedouch, 55.
“There shouldn't be that damned border in the middle of our village. I used to fish on the rock — today that's  impossible,” he said, although he conceded that “if the commander of the garrison is nice, you can still approach with your boat”.
It is hard to imagine today, but Bades was historically an active port, a point of passage between Europe and the Moroccan imperial capital of Fes.
The main trade today is trafficking cannabis towards Spain, as evidenced by the remains of a speedboat intercepted by the coastguard and abandoned on the beach.
According to the fishermen, their main problem is isolation.
“We have become destitute. We survive just on fishing,” said El-Guedouch. “There's nothing left here. Just a few tourists in the summer, who kill us a little more with their rubbish everywhere.”
“It's as if we're neither in Morocco nor in Spain.”