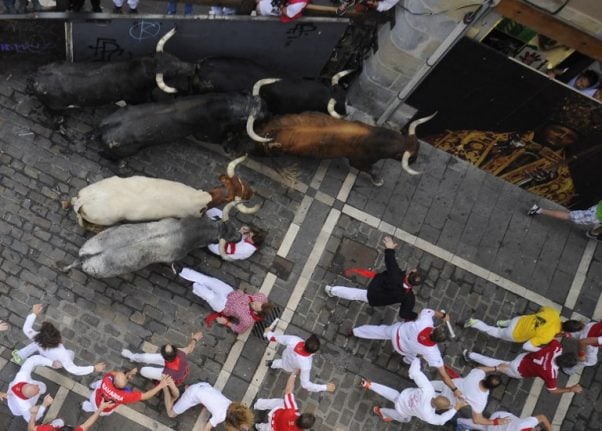 51 people were injured in this year's bull runs, down from 87 last year. Photo: ANDER GILLENEA / AFP
The annual San Fermin festival attracts hundreds of thousands of visitors from around the world, many of whom take to the narrow streets of Pamplona in northern Spain to run frantically alongside bulls while trying their best to avoid their sharp horns.
In their daily spreadsheet that tracks injuries during San Fermin, the regional government of Navarra, where Pamplona is located, said 13 men aged 24 to 55 were hurt and taken to hospital on Friday.
Of those two are American, another two are French, one is Italian and the rest are Spanish.
The government said a 27-year-old Frenchman and 30-year-old American suffered head trauma, without detailing whether the injury was serious or not.
The bull runs take place every morning at 8am during the festival that ended on Friday, after which the animals are put to death in bullfights.
Anyone aged 18 or above can take part, though authorities warn it is at their risk. Injuries are frequent and people have died in the past, the last one in 2009.
This year, 51 people were injured in the bull runs, down from the 87 injured last year.