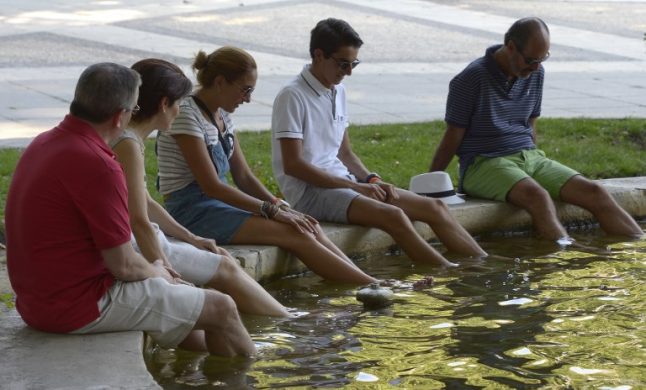 Cooling down in a city fountain. Photo: AFP

After enjoying a few days respite from the summer heat, Wednesday will see a return to sweltering temperatures, according to Spain’s state meteorological agency (AEMET).

From Wednesday, the mercury is predicted to peak above 44C in some places in Andalusia, Extremadura and Castilla La-Mancha putting 27 provinces across Spain on alert for extreme conditions.

The provinces of Badajoz, Huleva, Sevilla, Ciudad Real and Albacete are expected to bear the brunt of the heatwave at over 40C while Jaén, Cordoba and Granada will at times reach above 42C and possibly even 44C.

Nightime temperatures in those areas aren’t forecast to drop below 22C.

The heatwave is expected to last at least until the weekend.

Forecast for Thursday from ElTiempo.com

Those at the beach in the Costa Del Sol will be spared the worst of the heat, with temperatures expected to peak at 38C, while on the Costa Blanca the mercury won’t rise above 36C.

The sea temperatures have already reached record levels this summer.