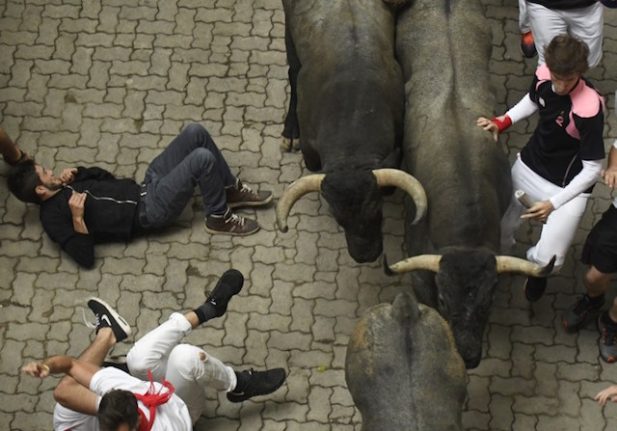 Some participants fall down as Jose Escolar's fighting bulls run past on the second day of the San Fermin bull run festival in Pamplona on July 8th. Photo: Ander Gillenea/AFP
Five Americans, three Spaniards and two French visitors, all males, required treatment after joining hundreds of intrepid participants in the second running of the bulls through Pamplona's narrow streets this week.
Two US visitors aged 22 and 35 were gored, the younger man seriously. The eight others hurt suffered bruising and grazing after tumbling on cobbled stones left slippery by rain.
Television pictures showed one man caught on the horns of a bull, being dragged several metres before being trampled on a bend along the 800-metre (-yard) course.
Red Cross personnel said they treated 77 people in all for assorted minor injuries after the race.
READ ALSO: Five things to do in Pamplona which DON'T involve bull runs
San Fermin, immortalised by Ernest Hemingway in his 1926 novel “The Sun Also Rises”, attracts hundreds of thousands of visiors from around the world.
The race lasted four minutes — about a minute longer than usual — after one of the six bulls caused brief confusion by turning around at one point.
Friday's opening run saw four people hurt, three of them gored. One man, a 46-year-old Spaniard, suffered serious injuries.
Fifteen people have died at San Fermin since 1911, with the last fatality occurring in 2009.
Last year, 87 were hurt, of which 12 were gored.