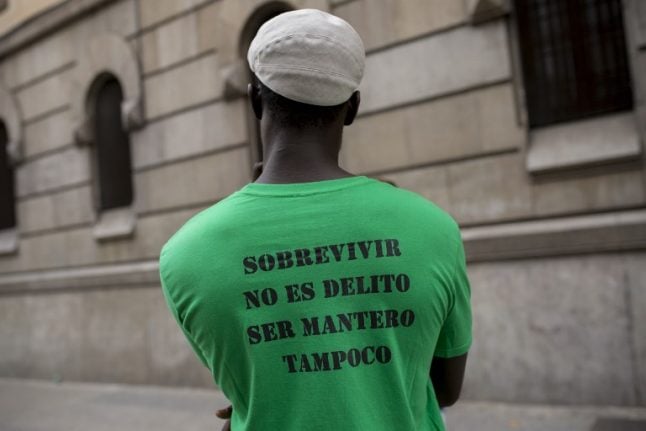 Caption: "Surviving is not a crime, nor is being a street sellet". File Photo: Josep Lago/AFP

Top Manta, an informal name for street hawkers who display their goods on a blanket, will buy shoes, bags, mobile phone cases, clothes and other good from wholesalers and brand them, according to a report in El Pais.

Top Manta's logo is made up of two waves: one represents the materials used, the other the perilous maritime journeys many of the sellers undertook to reach Spain.

The group behind Top Manta, the Popular Trade Union of Street Vendors of Barcelona, known as the Mantero Union, was founded in August 2015 by more than 200 illegal street vendors in the Catalan capital.

According to the group's Facebook page, the union was established with the goal “to defend the rights” of such workers. Mantero is a Spanish term for street sellers, mainly immigrants, who use a blanket as a shop window.

The union, which is in the process of completing all the legal requirements to patent the brand, hopes that the new product will help street sellers avoid counterfeit goods and breaking of the law by selling products illegally, Aziz Faye, spokesman for the group, told El Pais in an interview.

“We want to be above the talk that says we sell copies and fakes,” said another spokesperson for the group.
'Top Manta' is a derogative term for street sellers, who are mainly migrants of African origin.
“What was for a long time an act of discrimination, when they called us” top manta,” is no longer … We now claim the concept and dignify the word. For us it is a term of solidarity, struggle,” stressed the same spokesperson, talking to El Diario.
The cooperative plans to design and launch its own forthcoming products, such as clothes, as well as books on African culture, says the El Diario report.
According to the interview in El Pais, the group is talking to investors to expand. The products will be sold by street sellers in the Barceloneta beach area in Barcelona.
The Fundació Antoni Tàpies, as part of a collaboration with the Popular Trade Union of Street Vendors of Barcelona, will print 30,000 promotional postcards and distribute 100 umbrellas with images of the brand and the sellers – os manteros – themselves, according to antenna3.com.
According to data from the Interior Ministry and the tax office, more than 4 million counterfeit products were sold in Spain in 2016, for a total value of €800 million.
The total losses to the private sector amounted to more than €7 billion, reports the same source.
READ MORE: Riot in resort after street seller dies in police raid
Url copied to clipboard!