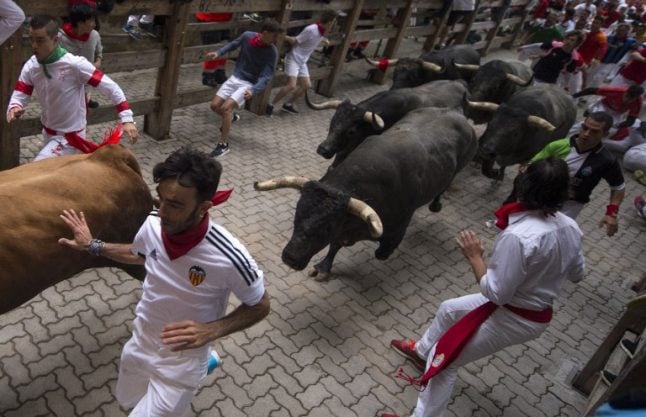 The world's most famous annual street contest between bulls and humans, known as the running of the bulls or the San Fermin celebrations, starts today in Pamplona.

The small Basque town is expecting its population to mushroom fivefold once again to one million people for the eponymous traditional celebration.

Everyday from July 7 to July 14, thousands of 'runners' are chased by six or more bulls through the narrow stone streets of Pamplona. The bulls chase the runners in white uniforms through the town's streets on a designated route for nearly a kilometre, right up to Pamplona's bullfighting stadium, where the animals are then killed.

Sometimes however it's runners themselves who are mauled. More than 200-300 people sustain injuries in the running of the bull each year; more than 15 have died since records began in 1925.

Last year, Sofía López González, a mother of two, was killed by a bull while leaving her home. She had not intended to take part in the bull run.

According to El Pais, 16,000 runners are expected to participate this year, 45% of which are foreign nationals.

Ernest Hemingway, who wrote The Sun Also Rises in Pamplona, ran in front of the bulls himself in 1924. Other famous visitors over the years have included Orson Welles, Ava Gardner, Derek Walcott and Arthur Miller.

Runners often spend months preparing for the bull run and undergo extensive physical and mental training. Awareness on the actual day is key, says Manuel Martín Carmona, 25, a runner from Arganda, nearly 400 kilometres away from Pamplona.

“Stay very still, very focused and know very well where you are: any minimum error and you are cannon fodder,” Carmona told El Mundo, touching on how to avoid injuries in the race.

Professionals like Carmona consider San Fermin the pinnacle of the season, yet 70 other villages and towns in the region host more than 100 annual encierros, 'bull runs', in which runners are haunted and hunted by bulls through narrow streets.

The beginning of the nine-day celebrations in Pamplona is enunciated with a pyrotechnic show, the chupinaza, whereby a rocket will be launched at noon today from a terrace in the town's city hall. The festivities also include eight corridas, bullfights, in the bullfighting arena where the races end each day.

Much of the money raised by the local festivities helps top-up local residents' meagre pensions or support local charities.

READ MORE: Five things to do in Pamplona which DON'T involve bull runs

More than 100 animal rights activists took part in a demonstration yesterday in Pamplona organised by The People for the Ethical Treatment of Animals (PETA) to protest the treatment of the bulls, which are killed each day after the races. The protesters marched with 'Stop bullfights' painted on their chests.

San Fermin is a celebration which dates from the 16th century and commemorates its moniker, the patron saint of the region San Fermin. For more details on the celebrations, download the event's app.

READ MORE: How to survive running with the bulls in Pamplona