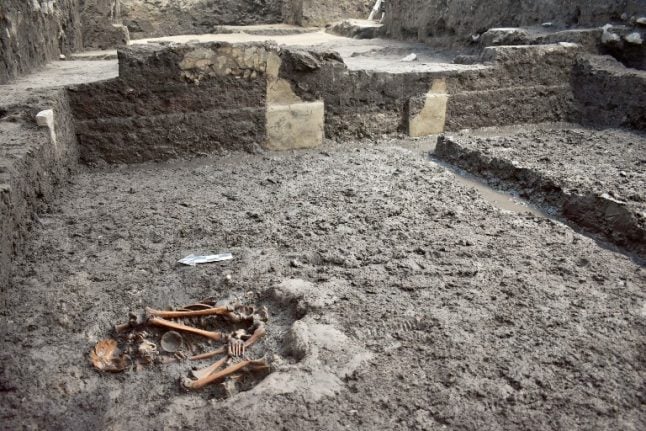 The structure, where Aztecs were also buried, is part of an old neighborhood in Mexico City called Colhuacatonco, famous for being a place where the Aztecs resisted the Spanish conquest in the 16th century, the National Institute of Anthropology said in a statement.

The new find buttresses the argument that Colhuacatonco put up passive resistance after the fall of Tenochtitlan, the capital of the Aztec empire, said Maria de la Luz Escobedo, the archeologist in charge of the project.

“It is very likely that first and second generation descendants of Tenochtitlan people quietly carried out the burials of seven people (three adults and four children aged one to eight) using the traditions of their ancestors,” she was quoted as saying in a statement issued by the anthropology institute.

READ MORE: A Spanish quest to hand down ancient secrets

Archeological teams found skeletons that were nearly complete and buried in the fetal position, and also many bone fragments, according to a video released by the institute.

The burials were done in the corners of the dwelling area and at the entrances, and have been dated to the time of Aztec contact with the Spaniards.

Funeral offerings were found: a small figure of a coyote, a bracelet with shells, two small knives made of obsidian and ceramics from that era.

Objects were also found that suggest a mixing of the two cultures, such as figurines of people with non-Aztec features and wearing hats.

“What we detect in the materials is 'that which is Mexican,' the blending that began to take place after the Spanish conquest was complete,” said Escobedo.

The rooms of the dwelling were built with stone, suggesting they were for important Aztec people and their relatives rather than common folk.

The most striking feature is a three meter by four meter (10 foot by 13 foot) area that was probably used for ceremonial acts.

Its polished and well-preserved floors have a design in the center, showing a circle with black spokes — possibly a representation of a shield.