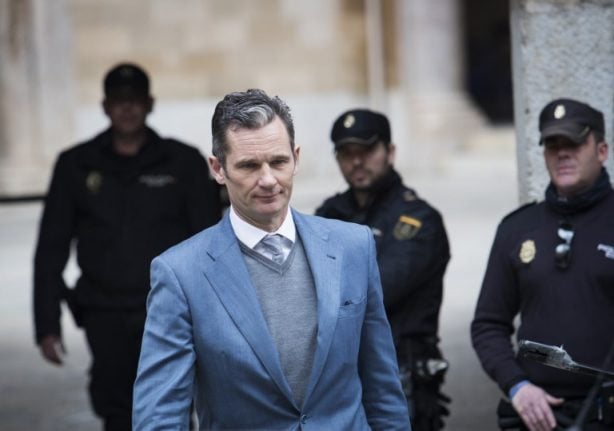 Iñaki Urdangarin, husband of Princess Cristina, King Felipe VI's older sister, was in February sentenced to six years and three months, having been found guilty of syphoning off millions of euros from a foundation.

However, prosecutors on appeal want the Supreme Court to add a new conviction for embezzlement of public funds, and raise his jail terms for his corruption, fraud and embezzlement convictions, the prosecutor's office said in a statement.

If the appeal is successful “the prison term will be extended by three years and seven months”, the statement said. “That supposes a maximum of ten years in prison.”

Urdangarin, 49, is also appealing the sentence, as are five other parties in the so-called Noos case, to the country's Supreme Court. It can confirm, overturn, cut or increase the term and its decision is final.

READ MORE: King's brother-in-law might not have to go to jail after all

A court in the Balearic Islands found Urdangarin — who remains free during the appeal process — guilty of taking millions of euros between 2004 and 2006 from a non-profit foundation he headed in the island of Majorca. He was also fined €512,000 ($585,000).

Cristina was tried on charges that she helped her husband evade taxes, but the 52-year-old princess was acquitted.

Prosecutors had initially sought a jail term of 19 years and six months for Urdangarin, a former Olympic handball player.

The corruption scandal involving Urdangarin, which broke out in 2010, sparked outrage when Spain was going through a devastating financial crisis, becoming a symbol of an elite out of touch.

It soured the end of the reign of king Juan Carlos, who gave up the throne in June 2014 hoping his son Felipe VI could freshen up the monarchy's image.

Urdangarin and Cristina have been excluded from all of the family's official public appearances since the scandal erupted. They now live in Switzerland.